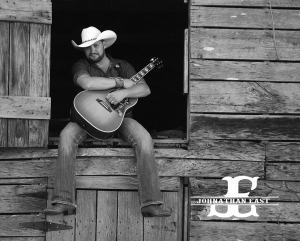 Born and raised in Clay County, Alabama, Singer / Songwriter Johnathan East has always had a passion for music. He started playing guitar around the age of thirteen and began writing and singing songs about his southern country life, the lifestyle that he grew up around, in addition to stories that came from true life experiences and down home living.
After years of just playing for friends, Johnathan decided to break out into the local music scene. He played at wedding receptions, birthday parties and private events in and around his hometown of Lineville, Alabama. Playing around town, the locals fell in love with this modern country singer because of his genuine style and his rebel attitude.
His first appearance in the local music scene was at AJ's restaurant in Anniston. He was soon known across east Alabama and parts of Georgia for his different style of country music. Johnathan was making his way to the top of the local music scene.

His music career was becoming a success after all the hard work and dedication he put into his passion and love of music. In 2007, Johnathan released his very first self-produced album, "Grits and Gravy". In the years that followed, Johnathan released several more albums, "One Horse Town", "Hayseed", "Fresh Out of Love Songs" , "Hangin' By a Thread", "Free Advice" and his most recent album, "Land of Cotton". In December, 2011, Johnathan decided to take his music production to a whole different level. He released a music video to his song "American Boy" and with that, he had so much positive feedback, that he immediately began working on a second music video. This video was to his original song that is a fan favorite, "A Little on the Redneck Side". He released this video in April, 2013, and with the video, the popularity of the song continues to grow. With all of Johnathan's songwriting ventures thus far and more to come in the future, he decided to form his own Record Label, Grass Roots Records, LLC, his own Publishing Company, Triple East Music and his own music company, Triple E Entertainment, LLC, all which promote his original music.

In addition to songwriting, Johnathan East has recently been touring around the Southeast playing his original music, along with a number of country and southern rock cover songs as a solo act and with The Trailer Park Cowboys.