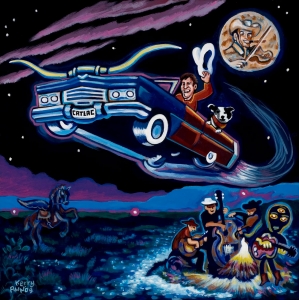 This record was made over three days in the first week of June 2009. With the help and engineering skills of my friend Grant Jackson Wilborn, and the direction of Matt (PawPaw) Smith, we set up in my Chainsaw Art Gallery in Manchaca, Texas and recorded.

Dan Johnson* on his 50's Gretsch lap steel and a GFI pedal steel, Randy Roberts* with his 40's Kay bass fiddle, and Charlie Gnerre on a set of drums called Slingerland Radio Kings, we laid down what is my favorite project to date. We all had a hand in producing and arranging these songs, playing them live over the past year. These guys are not only great players, they are good friends and worthy travelers. I hope this collection of songs reaches all the ears out there looking for something new. Thank you.
-Doug Moreland, fiddle/rhythm guitar

Moreland’s newest project reflects the mysteries of life in the West Texas mountains. He takes pride in it being a live recording made in just 3 days from his woodwork shop and art gallery. “We went back to the basics and made it real,” he says. He built his shop himself in 2003 using mostly salvaged materials.

Moreland and his 3 band members collaborated on all parts of the recording, under the direction of Matt “PawPaw” Smith, and engineering, mixing, and mastering of Grant Jackson Wilborn. The mix features Dan Johnson on the lap steel and pedal steel guitar, Randy Roberts on the upright bass fiddle, Charlie Gnerre on drums, and Moreland on fiddle and rhythm guitar.

September 26 coincides with Doug Moreland’s 7th Annual Cattlelacs Calfry cook-off and concert at his very own art gallery just south of Austin. The album goes on sale at the event, where purchasers will be entered to win a “Flying Armadillo” chainsaw sculpture by Moreland himself. More information about the event can be found at www.dougmoreland.com/calfry .

Being the eldest son of a wainwright, blacksmith, and fiddle-playing ranch hand, Doug left Fort Davis TX at age 17 (1992) for a career in the music business. After a brief attendance at South Plains College in Levelland TX, and a short stint as a funny man in a dinner show in Ruidoso NM, he toured with various acts around the country as a fiddle sideman. During this time, Doug also worked as a wrangler on a dude ranch in Phoenix AZ, trained his famous border collie dog "Holly-peño" to sing and play the fiddle (and more), learned to frame houses, and discovered the art of chainsaw carving taking him to Pidgeon Forge and Nashville TN. He also recognized his desire to front his own band and write his own songs, which brought him to Austin TX in late 1999. There he progressed from a comedic, solo act with a singing dog as the finale, into a full dancehall band by 2009 with his wit and charm playing right back into a fretless four-piece with steel guitar as lead!

Doug recorded his 7th album Barnstormer in 2009 as a 3-day, "live" project inside his self-built woodwork shop and art gallery, capturing a great acoustic sound from the warm wood floor and salvaged tin ceiling.

Doug appeared on The Tonight Show with Jay Leno in 2003 with his former companion Holly-peño (a black/white McNab dog). They appeared together on Animal Planet's Pet Star, as well as Ripley's Believe It Or Not! Doug has also made guest appearances in a handful of films, most notably the 2012 Richard Linklater film Bernie along with Jack Black and Shirley MacLaine.
11
What's This
Advertisement