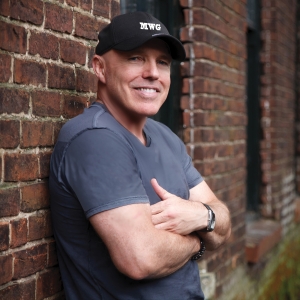 With a voice as comfortable as your favorite old shirt and as warm as springtime, Mark Wayne Glasmire has all an artist needs to touch a listener’s heart. His songs are garlanded in rainbow harmonies that bring The Eagles and CS&N to mind. His lyrics have a rare universal appeal, to lovers of all ages. Women feel his respect and attention; guys wouldn’t mind sharing a few stories with him over a beer or two. All that rings true on Can’t Be Denied, which releases this fall.
His parents had given him a guitar as a Christmas present when he was 10 years old. Soon Glasmire began applying his love for writing short stories to writing original tunes. He was still too shy to play in public until his girlfriend at Kutztown State University talked him into playing at a coffeehouse in her dormitory.
That’s all it took. After earning his degree in business administration, Glasmire recalls, “I’d do construction for my dad. Then I’d get cleaned up and drive an hour and a half to New York, through the Holland Tunnel and right into the Village. I’d play and come home at 2:30 or 3 in the morning. I’d get up at 6:30 and go back to work. On top of that I was playing locally in Pennsylvania.”
Sonny Ochs, sister of the late folk legend Phil Ochs, soon hired Glasmire and his friend Pat Troiani to perform at the historic Greenwich Village venue Gerde’s Folk City. Before long they were featured along with Suzanne Vega, Dave Van Ronk and Jesse Winchester on an episode of the PBS series Phil Ochs Song Nights, as well as on bills with Gordon Lightfoot, Tracy Chapman and other luminaries.
In search of new challenges and maybe a less grueling routine, Glasmire moved to Nashville, where he learned that he wasn’t the type of writer who could churn out country hits on command. “Some great people in Nashville can do that all day long,” he says. “I’m not one of them. I tried to be more country. But I found out pretty quick that you won’t find success until you’re true to who you are. Don’t try to be somebody else. If you’re constantly trying to be what somebody else wants you to be, you’re in trouble.”
And so Glasmire left for Texas, settled in Arlington and began composing more personally. This time, with writing chops sharpened in Nashville, he hit the stride he maintains to this day. His peers acknowledged his achievements with numerous awards — first place in the B.W. Stevenson Memorial Songwriting Competition in Dallas, the Dallas Songwriters Association International Songwriting Competition and the GINA/LAWIM Songwriting Competition in Los Angeles, as well as the Grand Prize in the Country Song division of the 2010 Chris Austin Songwriting Contest at Merlefest. His
single “I Like You” lodged for nine weeks at the top of Europe’s International Country HotDisc Chart in 2011. All traces of his onetime stage fright had vanished as he opened for Dierks Bentley, Guy Clark and other headliners.
More important, he grew to know himself better as an artist and to understand his mission. In a way, his horizons drew closer as he sought inspiration through everyday events. He’s part of a community, in a place where you know most of the folks know each other by their first name. But even — maybe especially — in this intimate world, his songs convey greater meaning than ever. Which is all he ever really wanted.
Harvested from life and shaped by Glasmire’s unique talent, Can’t Be Denied won’t be denied. But it can be savored again and again as music as limitless in its appeal as imagination itself.