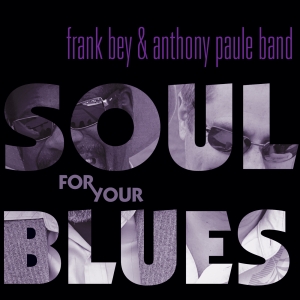 The Frank Bey and Anthony Paule Band, eight pieces of spellbinding, soul-blues genius, has been leaving a wake
of awestruck audiences whenever they take the stage. Their two CDs released in 2013, You Don’t Know Nothing, and Soul For Your Blues, earned them two Blues Music Award nominations, and an invitation to perform at the prestigious awards ceremony. Their show-stopping performance brought the audibly and visibly impressed audience to their feet. This well deserved attention has paved the way for three International tours in 2014, and 2015. The Bey Paule Band’s third release NOT GOIN’ AWAY, hit the streets June 2015 and in within six weeks made its way to #3 on the Living Blues Radio charts. Needless to say, NOT GOIN’ AWAY is receiving a generous amount of positive feedback from critics and fans alike. Frank Bey’s hypnotic vocals, and Paule’s lofty guitar playing, keep their band on a shelf all by itself. How- ever, if comparisons need to be made, they would be likened to Bobby Bland, B.B. King, Ray Charles, and Otis Redding.
3
What's This
Advertisement