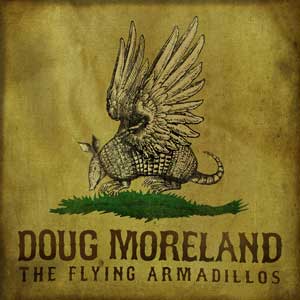 This album was recorded live to tape on a TasCam 388 on November 15 & 16, 2011 at Cattlelacs Chainsaw Art Gallery in Manchaca, Texas.

First of all, I miss my friend Billy Applegate. My favorite songwriting partner, your passing in '08 was too soon for me, but thanks for leaving me your songs to finish out. Wish you could hear them. Thanks Bill. Thanks to Randy Roberts for moving to Manchaca in '08, dropping everything and living in an Airstream behind my wood carving shop, just to play with my band. Thanks for your sacrifice. And to Rob Harding for following suit in '10 and also living here in your little Flying Cloud. Thanks for your dedication and keen ear, Rob. I thank my wife and family for putting up with my adventures as we all try to simplify our lives. To our Tuesday night songwriting crew (Stoney, Matt, Manzy, etc...), your forced prolificity (peer pressure) got many of these songs written. Thanks guy. Thanks to Grant and our many networks of friends that help in so many ways. I thank the Lord for the privilege to do what I do. And to you reading this, thanks for your support. -Doug

January 2012 -- Songwriter and artist Doug Moreland releases album The Flying Armadillos. The album continues Moreland's uplifting style of songwriting, but with a few thought-provoking themes thrown in this time. His first single "STAND" encourages personal responsibilities and mature thought, a foremost subject in today’s culture according to Moreland.

Like his 2009 project Barnstormer, Moreland recorded the album in his woodwork shop and art gallery. For The Flying Armadillos, a vintage reel-to-reel tape machine initially captured the sounds, before being digitally mastered by Grant Wilborn, who engineered both projects. Moreland and his 2 band members collaborated on all parts of the recording, along with James Gwynn on drums and Kevin Garringer on harmonica.

Moreland named the album after his band The Flying Armadillos, comprised of himself on fiddle and guitar, Rob Harding on guitar, and Randy Roberts on the upright bass fiddle. All members covered vocals, including dynamic 3-part harmonies. All songs on the album were written by Doug Moreland, except two co-written with the late Billy Applegate, and one written by Rob Harding.

Moreland states that the songs on the album vary from biscuits to politics. In other words, he includes his typical light-hearted swing, with his usual variance of dance-hall shuffles, some with a charged message. The complete album releases late January 2012.

Being the eldest son of a wainwright, blacksmith, and fiddle-playing ranch hand, Doug left Fort Davis TX at age 17 (1992) for a career in the music business. After a brief attendance at South Plains College in Levelland TX, and a short stint as a funny man in a dinner show in Ruidoso NM, he toured with various acts around the country as a fiddle sideman. During this time, Doug also worked as a wrangler on a dude ranch in Phoenix AZ, trained his famous border collie dog "Holly-peño" to sing and play the fiddle (and more), learned to frame houses, and discovered the art of chainsaw carving taking him to Pidgeon Forge and Nashville TN. He also recognized his desire to front his own band and write his own songs, which brought him to Austin TX in late 1999. There he progressed from a comedic, solo act with a singing dog as the finale, into a 3-piece western-swing band by 2012 with his wit and charm playing into the instrumentation of fiddle, upright bass fiddle, swing guitar, and 3-part harmonies.

Doug recorded his 8th album The Flying Armadillos in 2011 as his second "live" project with his band inside his self-built woodwork shop and art gallery, capturing a great acoustic sound from the warm wood floor and salvaged tin ceiling.

Doug appeared on The Tonight Show with Jay Leno in 2003 with his former companion Holly-peño (a black/white McNab dog). They appeared together on Animal Planet's Pet Star, as well as Ripley's Believe It Or Not! Doug has also made guest appearances in a handful of films, most notably the 2012 Richard Linklater film Bernie along with Jack Black and Shirley MacLaine.
17
What's This
Advertisement