Doug Moreland - Everybody Knows My Name 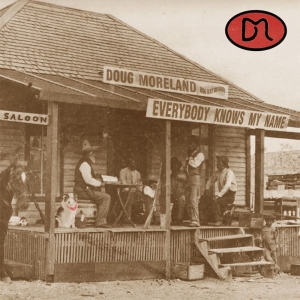 
EVERYBODY KNOWS MY NAME (2004)
2004 -- Doug Moreland, comedian/singer/songwriter, released his fifth album, Everybody Knows My Name, now available in stores and on-line. The new album features 17 of Moreland’s songs and was recorded with a full band at NoMountain Studio in Midland, Texas. It is a definite shift from his previous live comedy albums; however he does not stray too far from his well-known humor.

Moreland and "The Big Hat Band" have begun promoting this latest release in venues across Texas since the first of February. Although he has played fiddle and done some stand-in with several bands including Cross Canadian Ragweed, the backing by his own full band will be another change for Moreland. For the past four years, Moreland has regularly performed in front of thousands with only his guitar and his dog, Jalapeño. “Holly” and Doug have performed together all over the country, as well as on “The Tonight Show with Jay Leno,” Animal Planet’s “Pet Star,” and “The Bob and Tom” radio show.

Artwork and design by Doug Moreland
The cover photo was taken in Langtry, TX circa 1898
(I did a little adjustin'. Thanks Roy Bean!)

I would like to thank:
Tom Kelly, for helping with this the most. Billy Applegate, for being a hell of a writer and friend. Suzan, for believing in me and my crazy ideas and for saying YES. My Mom and Dad, for saying "You can do it!" even if they thought I couldn't. My Grandma and Grandpa, for giving me love and a place to live. My friend Bubba, for inspiring me to be more creative and funnier than I really am. Phil, Shelly, Lois, and Eldon, for showing me what a chainsaw is really for. Mel, for letting me hang out at his bar back in the day. Brown Distributing, for giving me beer and support. Wilson Capron, for letting me sleep on his couch. Suzan's family, for accepting me even though I'm a broke musician. Brandon Hodges, for keeping me on the right track even without the money for a train ticket. And I thank the Lord for letting me do what I do for a living.

I know I left people out, but don't feel bad, I will thank you in person the next time I see you. Of course, anyone that helped me in any way on this project I thank greatly! All you bands out there that I do shows with on a regular basis, you are all my friends and I thank you. There are too many of you to list and I hate typing. To you Oklahoma boys, you guys really make this business worth doing business. Keep on moving' to Texas, we'll take you all in.

Thank you all and I hope you enjoy this album as much as I did putting it together. It's my favorite so far. Bye.

Being the eldest son of a wainwright, blacksmith, and fiddle-playing ranch hand, Doug left Fort Davis TX at age 17 (1992) for a career in the music business. After a brief attendance at South Plains College in Levelland TX, and a short stint as a funny man in a dinner show in Ruidoso NM, he toured with various acts around the country as a fiddle sideman. During this time, Doug also worked as a wrangler on a dude ranch in Phoenix AZ, trained his famous border collie dog "Holly-peño" to sing and play the fiddle (and more), learned to frame houses, and discovered the art of chainsaw carving taking him to Pidgeon Forge and Nashville TN. He also recognized his desire to front his own band and write his own songs, which brought him to Austin TX in late 1999. There he progressed from a comedic, solo act with a singing dog as the finale, into a full dancehall band with his wit and charm playing right back into a familiar instrumentation of twin fiddles, upright bass fiddle, swing guitar, and minimal drums.

Doug appeared on The Tonight Show with Jay Leno in 2003 with his former companion Holly-peño (a black/white McNab dog). They appeared together on Animal Planet's Pet Star, as well as Ripley's Believe It Or Not! Doug has also made guest appearances in a handful of films, most notably the 2012 Richard Linklater film Bernie along with Jack Black and Shirley MacLaine.
10
What's This
Advertisement