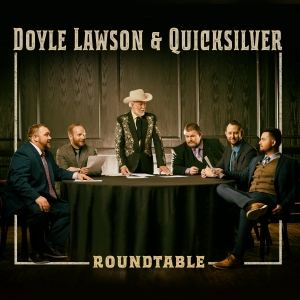 Doyle Lawson was born in 1944 in Ford Town, Tennessee. As far back as he can recall, he loved the sound of music, with nearly everyone he knew listening to The Grand Ole Opry every Saturday night. He loved all of the Opry stars but was most impressed by the intensity of Bill Monroe and his Blue Grass Boys.
​
The family sang gospel music as Doyle was growing up. His parents and sister were members of trios and quartets that sang a cappella music in churches and at revivals. No doubt, that’s how Doyle acquired his love of quartet music. When he was 11 or 12, his father borrowed a mandolin from one of the members of the family’s quartet, Willis Byrd so that young Doyle could give it a try. He was mostly self-taught, playing along to the radio or records and watching the occasional TV show. He eventually returned that mandolin to Mr. Byrd, and years later, Byrd gave it back to him at one of the first Doyle Lawson & Quicksilver concerts. Lawson still owns that instrument.
​
He met Jimmy Martin when he was 14 years old, when he’d already made up his mind that he wanted to play music for a living and began to add banjo and guitar to his skills. Four years later, in February 1963, Lawson moved to Nashville and got a job playing banjo with Jimmy Martin. In 1966, he started working with JD Crowe in Lexington, KY. In 1969, he was back with Jimmy Martin for about six months playing mandolin and singing tenor but then went back with J D Crowe until August of 1971. He started with the Country Gentlemen on September 1, 1971 and stayed with them until March 1979. By this time, he had played in bands that had “their sound” for more than 10 years and wanted to put together a group that would have his own "sound".
​
To that end, in April 1979, he formed a group that first was named Doyle Lawson & Foxfire but soon changed to Doyle Lawson & Quicksilver. He wanted a strong quartet like the ones his dad sang with. In the next few months, Terry Baucom, Jimmy Haley, Lou Reid and Doyle laid the foundation for what became the Doyle Lawson & Quicksilver sound. The makeup of his band has changed many times in nearly 40 years, but the sound remains distinct and arguably perfect.
​
Lawson has been hosting the Doyle Lawson & Quicksilver festival in Denton, NC for more than twenty-five years, adding a golf tournament to the festivities a few years ago.
​
The gospel music that he records and performs has always been important to Doyle, who, with his band, has made many more gospel recordings than secular ones. In general, however, Doyle has noted that he’s not sure exactly how many albums he’s recorded.

The versatile mandolin master and perfectionist bandleader announced his plans to stop touring at the end of 2022, but will remain active in music … and golf … and will surely continue to produce music for others as well.
46
What's This
Advertisement