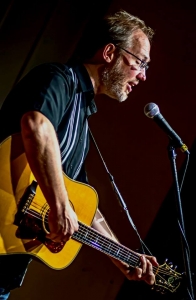 A lifelong musician with a background in musical theater, early music, and the 1980s Boston indie pop scene, Randall Kromm reinvented himself as a folksinger in 2009 and soon realized he'd found his musical home. Playing at coffeehouses, open mikes, and clubs in the greater Boston area, Randall quickly distinguished himself as a songwriter and performer. In the years since, he has performed sold-out shows at Club Passim, New England's premier folk venue, released four CDs, Water Wheel (2011), Holidays and Homecomings (2011), Time Won’t Let Us Stay (2014), and Rough and Polished Stones (2017), and received a multitude of accolades from the music community, including Christine Lavin and Don White.

His most recent prior CD, Rough and Polished Stones, was chosen by folk DJ Rich Warren of the Midnight Special radio program as “Rich’s pick” for the month of October 2017 and in 2018 received a glowing review in the premier roots music publication No Depression. In the review, writer John Apice lauds Randall’s effective songwriting across a variety of genres, comparing it to the work of Hank Williams and Towns Van Zandt, and noting: “Randall is covering a genre that Tom Waits isn’t, that Leonard Cohen touched upon but never developed, that Buddy Miller and John Prine do but always seem to pour a little vinegar in. Kromm pours no whiskey into his tunes. They are just wholeheartedly the truth – the naked truth.”

A prolific songwriter, Randall frequently returns to the studio, often joined by his two oldest daughters, Emma and Grace, talented singers in their own right who have a natural gift for harmony. Randall also performs regularly at folk venues in and around Boston.

What people are saying

Christine Lavin, a nationally touring folksinger, has hailed Randall's song "Water Wheel" as a "modern classic" and "a new folk standard." New England performing legend Don White covered the song "Water Wheel" on his 2010 release Winning Streak. White, who has recorded 11 CDs, had never covered another artist's music, but says the song "spoke to me deeply and immediately. My hope is that now lots of people will make the effort to discover the work of this very talented man."

Dan Cloutier, host of the Amazing Things Arts Center open mike and founder of Birch Beer Records, concurs: "Simply put, Randall Kromm is a masterful songwriter. He has the rare ability to look into the life of the common American and see the joys and pains we all have."

Veteran folk performer Tom Smith agrees, saying "Randall’s songs of common life, love, family, hopes, and uncertainty are presented like a conversation with a friend over a dinner table. Intelligent yet fun, relaxed yet musically interesting, introspective yet universal – I find my thoughts returning to his music long after each performance."

Sentimental Season is a collection of moving acoustic songs reflecting on the time from Halloween to New Year’s Eve, and the family gatherings and memories of holidays past that make this truly a sentimental season.