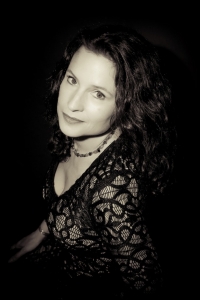 Devils are not the only thing to come from Tasmania. Audrey Auld's heart is in Country, Folk and Americana music with a presence as big as The Outback. A fearless entertainer, an honest and witty writer, Audrey is never afraid to venture into the dark places of life and shine a humorous light upon them. Her songs are heard on the Grand Ole Opry, recorded by Nashville stars and descendents of the Carter Family, included in TV shows ('Justified', ‘The Good Guys’, ‘Longmire’) and played within the walls of San Quentin Prison where she hosts ongoing writing workshops. Audrey calls her style, "music with the dirt left on". Auld lives in Northern California with her plumber husband and good dogs, growing food, making jewelry, writing songs, recording and touring.

"The only problem with Auld is trying to decide if she's more remarkable as a singer or a songwriter, which isn't the worst problem an artist can have."
~ John Conquest, 3rd Coast Music, Austin, TX, April 2012

"Anyone doubting that Audrey Auld is one of the world's best songwriters should give "Resurrection Moon" a listen." ~ Paul Riley, Country Music People, UK, April 2012
87
What's This
Advertisement