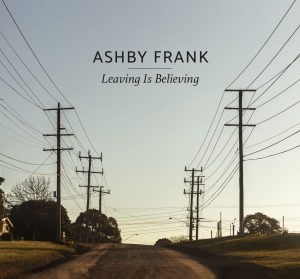 For more than half his life and all of this century, singer/songwriter/mandolinist Ashby Frank’s been too busy to find the time for making a follow-up to his 1999 debut album. So it should come as no surprise that Leaving Is Believing, his first full-length for Mountain Home Music Company, reveals an artist who’s saved up a lot to say—and given the care and sheer creative range that Frank and a distinguished list of colleagues brought to the project, it will be no surprise if the collection is found, when it’s all said and done, to be standing among the strongest releases of the year.

Indeed, Leaving Is Believing acts almost as a musical jigsaw puzzle, fitting together aspects of Frank’s musical identity that have been shown in different contexts and circumstances across his career into a single, multi-dimensional portrait. Those familiar with him as a writer of hits for artists like Junior Sisk, Dale Ann Bradley, Lindley Creek and more will be excited to learn that he’s an accomplished, expressive singer; those who know him from his work with the genre-busting Mountain Heart will find a musician at ease with the vocabulary of traditional bluegrass, while those who’ve seen him with Jerry Douglas’ Earls of Leicester will be introduced to an artist with an affinity for deep catalog modern country; and those who have chuckled at the hillbilly humor of the Darrell Brothers will be dazzled by his elegant, incisive mandolin playing.

For listeners in each of the different audiences Frank has touched over the years, familiar names and musical voices offer signposts throughout the collection, from the opening “Any Trouble,” an entry from a 2011 Glen Campbell album that features bandmates from Mountain Heart (who appear throughout the album) and from the critically acclaimed Likely Culprits, to the whimsical original, “Paintball Gun,” with appearances by Douglas, Ronnie Bowman and the Travelin’ McCourys’ Jason Carter, to Tom Paxton’s folk and bluegrass classic, “Where I’m Bound,” which includes Bowman, John Cowan, and former Mountain Heart fiddler Jim VanCleve. Still, there’s never any doubt as to whose album Leaving Is Believing is, and what emerges is a compelling distillation of several decades’ worth of artistic exploration. Few artists have Frank’s unique sensibility, and even fewer have the skills and vision to knit together each of its elements into a project at once focused and kaleidoscopic.

“I started my first professional road gig as a musician the week before I turned 16 years old, and I’ve spent most of my time since then either behind a microphone or traveling to get to another one,” Frank recalls. “When I decided to make this album, I knew I wanted to gather songs that meant something to me and represented my musical journey. I also wanted to make sure that I recorded a variety of songs, including a couple of the more quirky tunes that I’ve been known to write. I am so fortunate to have Brandon Bostic as a co-producer and engineer on this project, because he saw and heard what I wanted to do from day one. We were able to include so many of my amazing musician friends, and they brought these songs to life in a way that I couldn’t have imagined before. I am so excited to share this album with everyone. I couldn’t be more proud of the entire project.”

About Ashby Frank
North Carolina-raised, Nashville-based singer/songwriter/mandolinist Ashby Frank stands out from the crowd. Since his arrival in Nashville in the early part of the century, Frank has become known as one of Music City’s most valuable collaborators, and now he’s begun releasing music of his own with Mountain Home Music Company. His first single with the label, “Midnight Highway,” quickly topped Bluegrass radio charts as a broad range of listeners became acquainted with talents that industry observers have known of for years. Frank’s resume includes stints as a collaborative member of the Mashville Brigade and the Likely Culprits, as well as recordings and performances with a wide array of bluegrass and roots music mainstays, including the Earls of Leicester, John Cowan’s HercuLeons, Michael Cleveland & Flamekeeper, the Marty Raybon Band and Special Consensus. He’s scored as a songwriter, too, penning songs for Junior Sisk, Amanda Cook, Dale Ann Bradley, Lindley Creek and more, and even taken on the world of comedy as a member of the Darrell Brothers.
15
What's This
Advertisement