Dunlap & Mabe - Stumblin' Out The Gate 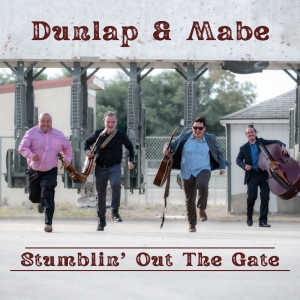 Stumblin' Out The Gate and Dunlap & Mabe started as a solo project from Jack Dunlap at the end of 2020. Jack and Robert had toured together as the Robert Mabe Band in 2019, but when the shutdowns forced them to stop touring, they looked into other projects they could do. Jack also had his band, the Jack Dunlap Band, which consisted of mandolin, saxophone, bass, and drums, playing a funky type of Jazz-Grass. In 2020, Jack also recorded a solo record of just mandolin and bass to reflect the kind of music he knew he'd be playing throughout the shutdowns. He brought Alex Kimble in to play bass on that project.

At the end of 2020, Jack decided to record a more Bluegrass/Newgrass type record so he could explore and focus on his guitar playing a bit more. Since he had concentrated on only playing mandolin for the last eight years at that point, he felt drawn back into the music he first fell in love with when he started playing at the age of 12. That album was originally going to feature Jack on guitar and mandolin, Robert on banjo, Mason Wright on fiddle, and Kevin Johnson on bass.

When things started to open back up in 2021, Robert and Jack began playing together again, sometimes as the Robert Mabe Band and sometimes as the Jack Dunlap Band. Mid-2021, they decided to partner up and become Dunlap & Mabe. They brought in Alex Kimble on bass and Mason Wright on fiddle. By then, the songs that Jack planned to release on his new solo record had evolved the more the band played out, so he decided to scratch that project and start again as Dunlap & Mabe.

In August 2021, the new band went into the studio for the first time to start cutting the new record. It was recorded, mixed, and mastered by Will Shenk and features 9 original songs and 1 cover. It was co-produced by Jack Dunlap, Robert Mabe, and Will Shenk. 3 singles were released in 2022, with 2 making their way to the Bluegrass Today Grassicana chart.

1.  Time Is Running Out (Jack Dunlap) (4:01) Genres: Bluegrass, Folk, Americana
ISRC: QMS4L2200161
Written by Jack Dunlap
Published by Frogtown Music (BMI)
Time Is Running Out was written by Jack Dunlap. It was originally going to be featured on his solo project that evolved into Stumblin’ Out The Gate. It was written in the Fall of 2020 while Jack was “in his rediscovering the guitar” stages. “I was sitting in my lesson studio one day waiting for a student and just running through some riff ideas. I knew I wanted to write a story song based on something that might happen in a Western movie. All of a sudden, the first line came to me, “Just through the holler I hear their horses run…” and the rest of the song just came out.” -Jack Dunlap

3. Flowers Down Below (Jack Dunlap) (5:19) Grassicana / Bluegrass / Roots
Featured Single
ISRC: QMS4L2200040
Written by Jack Dunlap
Published by Frogtown Music (BMI)
Flowers Down Below was written by Jack Dunlap. It was originally going to be on a follow-up album to his solo mandolin record, “The Isolation Sessions”. He wrote it for solo mandolin and even performed it that way in 2020 during solo shows. It eventually was transferred to guitar and was another song that was originally going to be on his Bluegrass solo project.

“Flowers Down Below is a mournful song about loss and never gaining closure. Maybe you were in an abusive relationship, and you left but never got justice. Or maybe you have someone who’s passed away you never had the chance to make peace with. It’s an open-ended feeling that can make it seem like you’re drowning and can’t make it up for air. You feel alone, tired and broken, and that’s the feeling I wanted to channel in this song and performance.” -Jack Dunlap

4.  Stumblin’ Out The Gate (Robert Mabe) (3:38) Genres: Bluegrass, Folk, Americana
Featured Instrumental
ISRC: QMS4L2200162
Written by Robert Mabe
Published by Frogtown Music (BMI)Stumblin’ Out The Gate was written by Robert Mabe. The instrumental on the album this one showcases the band’s fantastic instrumental abilities.“This one I feel took the most work arrangement-wise. Robert brought this one to the band in early 2021. Touring hadn’t kicked back in yet, but we were playing 4 shows a weekend as a trio at The Purple Fiddle in Thomas, WV. At that point in the pandemic, we weren’t allowed to sing at venues in West Virginia, so we had to come up with two hours of instrumentals. Robert showed us this one, saying “Yeah the A part is in 9 and the B part is in 4, oh, except where it goes back to 9.” Alex and I just looked at each other. We went through a lot of different arrangements, but nothing ever felt quite right. One afternoon, I was messing around with it, and I thought, what if instead of a 9 feel I just put it to a bluegrass rhythm? Well, it worked. Then I thought, what if we make the 9-part a three-part round? Now, that part took some more arranging, but it worked! This is one of my favorite songs on the album to play live. It’s super fun to play, and I’m proud of how this one turned out.” -Jack Dunlap

5.  Sailing Song (Jack Dunlap) (4:49) Genres: Bluegrass, Folk, Americana
ISRC: QMS4L2200163
Written by Jack Dunlap
Published by Frogtown Music (BMI)
Sailing Song was written by Jack Dunlap. It was another song intended initially for Jack's bluegrass solo project. "I wrote the melody to Sailing Song on the way home from a Jack Dunlap Band practice one night. I spent the rest of the evening trying to think of lyrics I could put to it, but it wasn't until I laid down and shut my eyes that it hit me, "Sailing on the ocean, sailing far away…" and it wasn't long until I had the rest of the song down." - Jack Dunlap

6. With The Other Not Around (Buddy Dunlap) (3:40) Genres: Bluegrass, Folk, Americana
ISRC: QMS4L2200164
Written by Buddy Dunlap
The Other Not Around was written by Buddy Dunlap. It was initially recorded on a record by the band Lonesome Highway in 2009 called The Highway Called. "This song was written by my brother Buddy. We played it together for years while I was in Bud's Collective. I brought this one to the band because I felt we needed an up-paced bluegrass tune to add to the set, and this one fits right in there." -Jack Dunlap

7.   On The Bottom (Robert Mabe) (3:51) Genres: Bluegrass, Folk, Americana
ISRC: QMS4L2200165
Written by Robert Mabe
Published by Frogtown Music (BMI)
"It's a song about unfaithfulness—a painful observation of someone having an affair and the consequential end of the relationship. I had toyed around with the song's main riff for a while, originally thinking it would be an instrumental, but it sounded so fitting for the lyrics/theme to On the Bottom. Once it was written and arranged, I still wasn't sure it would be a good song. After rehearsing it with Jack, Alex, and Mason, I knew it was a good and perfect fit for Dunlap & Mabe."
-Robert Mabe

8.  Goodbye Marie (Dennis Linde/Mel McDaniel) (3:35) Genres: Bluegrass, Folk, Americana
ISRC: QMS4L2200166
Written by Dennis Linde and Mel McDaniel
Published by Dennis Linde Legacy (BMI)Goodbye Marie is a Kenny Rogers song from 1979. It was written by Dennis Linde and Mel McDaniel and tells the story of someone who goes to Mexico and falls for a girl he can't stay with. "I first heard Goodbye Marie in 2014 when I first discovered the album Wired! by the band Livewire. I was immediately drawn to it but didn't think about working it up until 2021. We dig the song so much we've played it in just about every performance since then, so it had to go on the album!" -Jack Dunlap

9.  Don’t Know Why (Robert Mabe) (5:05) Genres: Bluegrass, Folk, Americana
ISRC: QMS4L2200167
Written by Robert Mabe
Published by Frogtown Music (BMI)Written by Robert Mabe, Jack and Robert had been performing Don't Know Why at live shows together since 2019. It was initially recorded on Robert's live album several years ago at The Bright Box Theater in Winchester, VA. "This song looks at corrupt media, failed politicians, and a naive population….draw your own conclusions." -Robert Mabe

10.  Sit and Watch It Rain (Jack Dunlap) (4:39) Genres: Bluegrass, Folk, Americana
Featured Single
ISRC: QMS4L2100222
Written by Jack Dunlap
Published by Frogtown Music (BMI)
Sit and Watch It Rain was written by Jack Dunlap, also in 2020, during his "rediscovering the guitar" stages. It, too, was going to be featured on his solo bluegrass record that eventually became Stumblin' Out The Gate."Sit and Watch It Rain is a classic heartbreak song. A man tore down by losing his love; he can only find peace and satisfaction when it's raining. I also use rain as a drinking metaphor, so this song is about how loneliness and desperation can lead to unhealthy habits and addiction." - Jack Dunlap

In 2019, Robert brought Jack into the Robert Mabe Band to fill the vacant guitar spot. At the time, Jack was prominently a mandolinist. He had played mandolin with Bud's Collective since 2012 and had his own Jack Dunlap Band, which featured mandolin, saxophone, bass, and drums, playing Jazz-Grass and funk primarily.

When 2020 hit and tours were canceled, they each turned to different things to make ends meet. Jack focused on playing solo gigs while Robert worked odd jobs around his town. Towards the end of 2020, Jack started delving back into guitar and found a new love for Bluegrass music, the style he had grown up playing. He began writing for a Bluegrass/Newgrass album so he could explore the guitar more. Jack brought Robert in to play banjo on the record.