The Alex Leach Band - I'm The Happiest When I'm Moving 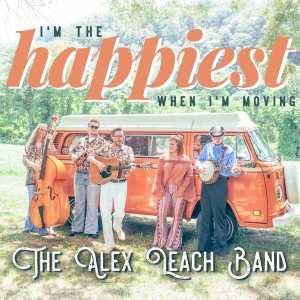 With the release of their first full-length album for Mountain Home Music Company, the Alex Leach Band and its youthful leader will make a bold statement that their fresh take on bluegrass — one that draws on a wide-ranging set of historical sounds, yet remains as authentic as Alex himself — is just what 2021 needs.

Produced by award-winning Americana music icon, Jim Lauderdale, I’m The Happiest When I’m Moving — now available for pre-order ahead of its March 26 release — shows off a healthy dose of creativity that builds on, but is never overwhelmed by influences that range from Leach’s tenure as a member of the veteran Clinch Mountain Boys to the exuberant sounds of a myriad of obscure and semi-obscure groups that he has been spinning on-air since he was a pre-teenaged DJ at Knoxville’s legendary WDVX.

These influences are seen in the band’s latest single, “Golden Rule,” which carries a timeless message (as the title suggests) that is especially relevant today. The Alex Leach Band’s version was specially selected to kick off the new album because of how it represents both the group’s musical style and philosophy. Performed in reverence to the early bluegrass sound Leach has become known for, it showcases the talent of this group of young players and their ability to update traditional music for modern fans.

“‘Golden Rule’ is a song that has a timeless message. It came from a Bluegrass Tarheels record,” says Leach. “I’ve wanted to record it for many years, and I think the band did a tremendous job of capturing the original feeling of the song. I hope everyone enjoys our version of this obscure classic!”

Though there are a couple of additional covers from such groups — and a title track from Lauderdale and Susan Gibson (“Wide Open Spaces”) — on the project, the emphasis is on original songs, with half bearing Leach’s name. And between the uber-traditional sound of “Rambler’s Return,” the folk-flavored lilt of the group’s second single, “October Fall,” and the distinctive melange of “Take Me Back” (written and sung with his wife, Miranda), and all the rest, what emerges is a convincing portrait of a young artist no less comfortable striking out in new directions as he is within the bluegrass mainstream.

In addition to vocalist Miranda, the Alex Leach Band’s members — JT Coleman (bass), Joshua Gooding (mandolin), Brandon Masur (banjo) — are, like Leach himself, musically omnivorous students of bluegrass, giving the group both an unusual stylistic depth and a rare ability to sound as if they’d been playing together for decades. And with Leach’s former Clinch Mountain Boys bandmate John Rigsby on hand to supply just the right touches of fiddle, the result is an undeniably impressive introduction.

“I love Alex’s writing, picking and singing,” enthuses Lauderdale. “And I think Alex has created new classics with this album. The Alex Leach Band really shines and shows how great they are together.”

For those who’ve known Alex Leach only for his mastery of the quintessentially bluegrass Stanley style — and, indeed, for just about everyone — I’m the Happiest When I’m Moving is bound to be a revelation that, for all his devotion to bluegrass tradition, The Alex Leach Band is standing tall in a thoroughly modern musical world.

About The Alex Leach Band
Hailing from the mountains of East Tennessee, Alex Leach is no stranger to the world of music. Just 30 years old, he has already been in the business for more than two decades, earning two “DJ of the Year” awards from the Society for the Preservation of Bluegrass Music of America by the time he was 15, and appearing on CMT's "Big Ticket," the BBC, and Peter Jennings' "ABC World News Tonight."

Yet even as he was building his reputation as one of the premiere radio voices in bluegrass, Alex was honing his skills as a guitarist and banjo player. He began his professional career as a musician at the age of 19, and was recruited a few years later by Ralph Stanley II, the son of iconic bluegrass pioneer, Ralph Stanley, with whom he had the opportunity to play banjo on the Grand Ole Opry in 2014. In the years that followed, he toured widely with “Two,” earning critical accolades for his playing, his compelling lead and harmony vocals, and for his additions to the bluegrass canon with songs like “Mountain Heartache.”

In late 2019, Leach took another giant step in his career when he and his wife, singer Miranda Jo, launched the Alex Leach Band, a quintet that includes JT Coleman (bass), Joshua Gooding (mandolin, vocals) and Brandon Masur (banjo). ​With influences ranging from The Stanley Brothers to The Beach Boys, and Curtis Mayfield to Porter Wagoner, Alex Leach's music is both traditional and original, nostalgic and forward-looking — the sound of a new generation of bluegrass artists.
19
What's This
Advertisement