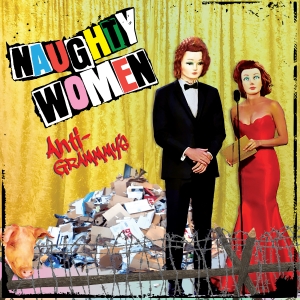 Naughty Women are one of those not-easily-categorizable bands. They don't seem to neatly fit into a particular time or genre. Yes, they arose out of the original Southern California punk scene of the late '70s. But they never fully conformed to the evolving conformity of the supposed non-conformists there.

Founders of the band and high school buddies Bill Evans and Rob Larson were not fitting into any of the jock, surfer, stoner or other scenes present at Fullerton High School in the mid-seventies. When punk rock reared its ugly head around this time, it matched the anger and alienation they were feeling. After first hearing whispers of this scene and then broadcasts of it from Rodney on the Roq, Evans and Larson started attending shows in Hollywood. It wasn't long before they put their own band together (as so many did at that time.)

While always maintaining a punk ethic, they didn't always conform to what most of the rest of the scene was doing. Instead of looking like all the other punks, they sported a glitter / trash-glam look somewhat influenced by the New York Dolls and Rocky Horror Show. And though they always had a loud, raw and hard punk sound, they incorporated some heavy metal stylings that they never apologized for. All of this probably made life more difficult than necessary for them -- and ultimately led to violent encounters with audiences. Taunting the crowd while wearing women's lingerie on a stage decorated with porno, barbed wire, and dead animal parts can do that.

In its first incarnation, the band was active from the late '70s to early '80s. There was an almost endless stream of different musicians filtering through the band. Some of them went on to varying degrees of fame in other musical endeavors. But the core of Naughty Women was always Larson on vocals and Evans on guitar -- with the two of them doing the songwriting.

During the pandemic of 2020, the two reunited after decades of estrangement. There was buzz on the internet and elsewhere about this forgotten eccentric band. People were starting to release lost demos and such of Naughty Women. Evans decided that instead of this legacy getting totally out of their hands, it was time to put the band back together and record a new album -- but only if it was at least as intense, raw, edgy, and brutal as the old stuff. No mellow old-guy crap.

"I think what Naughty Women were always about was roaring at the establishment, disturbing the comfortable, awakening the slumbering, annoying the boring, embracing the darkness, and rocking the complacent. And weirdly maintaining a sense of humor through it all," says Larson. It seems they've maintained that with the Geza X-produced scorching new album The Anti-Grammmys.

Though Naughty Women have their own sound (practically their own genre), you definitely catch elements of those who inspired them: The Stooges, The Dead Boys, The Germs, Motörhead, Black Sabbath....

Rounding out the new Naughty Women lineup is a killer rhythm section featuring Ellery Peterson on bass and Steve Stafford on drums.