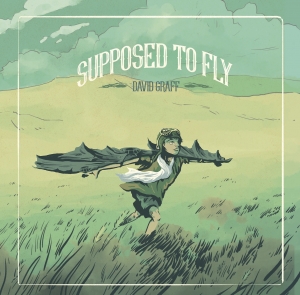 David Graff began his music career as a drummer but soon turned to songwriting as a creative outlet and a way to take control of his career. Despite early success, including recording an album with Grammy-winning producer Greg Ladanyi, songs placed in movies and television, a Genie Nomination in 1992 for best song in a Canadian movie, and an EP called "Some Of What I Know,” he dropped out of the music business in the late nineties to pursue a career as a visual artist.

David moved to Bowen Island and turned his creative energies to making art, quickly acquiring representation in a number of galleries in Canada and the U.S. His work can be found in private and corporate collections around the world and can be seen in movies, television and publications.
During his self-imposed hiatus, he continued to write songs, despite having no plans to share them publicly.

David's creative and musical roots run deep, and in 2012, he began performing again. In 2016 work started on an album of new songs, co-produced by daughter Julia Graff and James Perrella and featuring a number of Vancouver’s top touring and studio musicians.
A new chapter begins with Supposed To Fly.
7
What's This
Advertisement