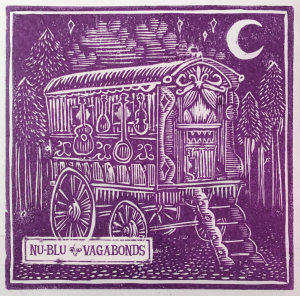 
About Vagabonds:
Vagabonds has been an emotional endeavor from the beginning. For seven years now, having spent over 200 days each on tour, the road has become our home,” says Nu-Blu’s Carolyn Routh. “We have seen a lot, done a lot, and embraced life not only through our own experiences, but also through the lives of those we have met. This project reflects the collective heart and soul of them, and of ourselves along the way.-Carolyn Routh

It’s been a little while since we’ve had new music from Nu-Blu, the North Carolina-based band headed up by husband-and-wife team Daniel and Carolyn Routh. Their last album, All the Way, came out back in 2014, with hit single That’s What Makes the Bluegrass Blue taking the airwaves by storm throughout 2015. They’re back this summer with Vagabonds from Voxhall Records, eleven tracks full of emotional stories and smooth, country-tinged melodies.

The band’s showpiece is bass player Carolyn Routh’s voice, which is in the forefront on all but one song. Part of her talent lies in knowing when a song calls for belting out the lyrics, and when it calls for a softer, more restrained vocal. On opening track, The Bridges That You’ve Burned, a rollicking kiss-off number led by T.J. Honaker’s banjo, she embraces the anger and bitterness in the lyrics, giving a no-good man a firm goodbye. A fun cover of Waylon Jennings’ and Willie Nelson’s Good Hearted Woman calls for a country powerhouse approach (think Tammy Wynette), set to bouncy contemporary grass instrumentation.

On the other hand, the soft guitar intro of 640 Battlefield Drive sets the tone for a story of a mother sending her two sons off to war. Carolyn’s more delicate approach here matches the mother’s pain when she finds out that only one will be coming home. A similar tactic is used on Gypsies on Parade, a melancholy-sounding number written by Mark Miller that takes listeners behind the scenes of a famous band on tour. It’s not all adoring fans and number ones, but plenty of lonely nights and regrets for leaving loved ones at home. Stripped down mandolin and guitar from Clint White and former member Levi Austin work well together to create the song’s atmosphere.

A Lot More Love, penned by Michael Gresham, Jill Spencer, and Troy Johnson, tackles pertinent societal issues, urging listeners to overlook outer appearances, religion, and political beliefs in favor of remembering that “everybody’s got a heart that bleeds, everybody’s got a road to walk.” The lyrics present fairly broad images (a man in a truck with a gun rack, a woman in a VW bug with a rainbow on its window), and it could be argued that it will take more than “a little less hate and lot more love” to fix the divides in American society, but the song is definitely a good reminder to think before judging others. Surround Me with Love, originally an early eighties hit by country singer Charly McClain, is another track with a positive message. It speaks of a comforting person that the singer goes to when “dreams come falling down, friends just can’t be found.” It could easily be read as either a secular love song or as a Gospel song.

Other highlights include the gently rolling How Many Rivers, a quietly lonesome number penned by Shawn Lane and Gerald Ellenburg with lead vocals from Daniel Routh, and the uplifting anthem Still Small Voice from Jimmy Fortune, Tony Lopacinski, and Devin Belle. Fortune and Ben Isaacs provide guest vocals on the stirring song, which urges listeners to allow their inner selves out, embracing imagination and voicing opinions. The band takes a poppy, progressive approach to the song, with a nice buildup to the chorus.

Nu-Blu is a creative band. You’ll very rarely hear them relying on old standards or even bluegrass deep cuts. Instead, they find intriguing new songs from writers both in and outside the genre, and reinvent older tracks that, in general, haven’t yet found a home in bluegrass. On Vagabonds, as on some of their past releases, they embrace more of an acoustic country vibe rather than straight-ahead bluegrass, and it’s definitely a sound that works for them and allows Carolyn Routh’s vocals to shine. - John Goad / Bluegrass Today