Ridin' Through The Country 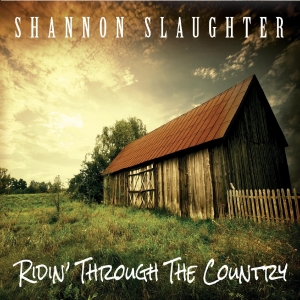 "This is my tenth year as a solo artist, and I'm so proud of this new single," said Slaughter. "The tune's hook is a commonly used phrase from VA/NC/KY/TN area when folks are leaving the flatland headed up to the high country. It really spoke to me and reminded me of my younger years living in Radford and Meadows of Dan, Virginia."

Slaughter achieved significant chart success with his previous album including, "The Devil's Broom" from Hold On To Your Heart and two #1s singles on Bluegrass Today Top 20 Songs chart with "That Old County Road" and "He Moved A Mountain" from the album Never Standing Still.

"It was a real treat to get to be a part of this new project that Shannon has put together. He always finds or writes songs that seem to resonate with me. This is another in a long line of terrific tunes he's recorded that I think is just killer. I believe you will too," said Adam Steffey.

Shawn Lane agrees, saying, "Shannon never fails to plow deep in the field of creativity. 'Goin' Up The Mountain' is a great result of that. Listen, and you'll see what I mean!"

Radio programmers can download the new single at AirPlayDirect or send a request to penni@hoperiverentertainment.com for a direct download link. In addition, the song is available for streaming and purchasing at all major outlets, including Spotify, Apple Music, Amazon, and more.