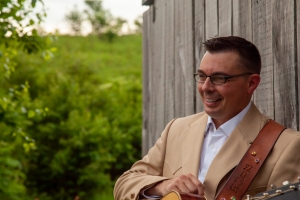 Single Release From Corey Zink, “Best of Her (Cooper’s Song).”

Corey Zink, a popular New England bluegrass artist now relocated to east Tennessee, is releasing a close-to-heart single from “Lifetimes,” his debut album on the Sound Biscuit label. All the songs are Corey’s compositions in which he is supported both by his bandmates from the northeast and new friends from his current home in the Volunteer State.

“When I witnessed the birth of my first born Son, Cooper. I could not have prepared myself for the level of pride and joy that I would feel on that day, as My wife Missy and I became parents for the first time. Shortly thereafter, I wrote this song as a gift for her with the intent of keeping those precious moments forever fresh in our minds, whenever we listen back to the song. Unexpectedly, “Coopers Song” has become one of my most requested originals and I am so proud that this song brings joy and helps others to reflect on special memories of similar experiences in their lives.”
- Corey Zink

“Best of Her (Cooper’s Song)” is now available for radio airplay.
The single will be available worldwide September 3, 2021


The official Worldwide release of “Lifetimes” from Sound Biscuit Artist Corey Zink was released July 23, 2021. This heartfelt collection of original songs written by Corey touches on topics that will somehow connect with everyone who listens. What makes this project unique is Corey’s ability to translate the joys and the inevitable struggles of life into a musical story that touches us all on a very real level through our own experiences.

Songs of family, choices, loss, love, respect and growing old all come together to tell a story. Each song written and performed with personal ties to Corey’s heart.

“Lifetimes” has been an extremely exciting project from start to finish. I wrote about things like the birth of my first-born child, moving away from home, becoming my own man, being a husband and father and learning to appreciate what is important in life. I have always liked songs that tell a story. Songs that touch the heart and help us reflect on good memories or encourage us to remain humble and Thankful for our Blessings. This project soared to a new level when I began working with Dave Maggard and signed on the Sound Biscuit label. The quality and passion that went into this project at the hands of the incredible team of engineers, musicians and singers was more than I could have ever imagined. This whole album is special to me for so many reasons. I’m especially proud to have captured these moments in time with my 12-year-old son Mason singing harmony on some of the tracks. I hope “Lifetimes” gives listeners a glimpse into the person I am and if in some way, my songs touch even one heart or brings joy, I will consider this project a complete success.
-Corey

“I have really enjoyed my time working with and producing Corey. From his heartfelt lyrics and smooth baritone vocals, to his love for family and donuts. Corey is the real deal. By looking into what has been, what is, and at some point, what will be, he has a unique way of translating life and relationships into lyric and song. That’s a true gift”.

“Lifetimes” can be ordered directly from CoreyZink.com as well as SoundBiscuit.com and will be available July 23rd Worldwide digitally from all major distributors.


Sound Biscuit is excited to announce the new single release “Bein’ Country" from the self titled upcoming debut album on the Sound Biscuit label, “Corey Zink.”

“Bein’ Country” was written and arranged by singer songwriter Corey Zink. Coreys’ writing style is basically a head on collision with his love for traditional bluegrass and classic country music. His upcoming album will be a true testimonial to the original style that is purely Corey Zink.

“I wrote this song to honor my Father, Ron Zink. His quiet strength and humble Country upbringing continues to influence my life. I’m proud to release my first single on the Sound Biscuit Label from my self titled, all originals album.” -Corey Zink

Corey built a huge fan base in the Northeast festival scene before moving to East Tennessee and entertaining at Dollywood for 2 years. Dedicated to his music, Corey went back full time on the road with his Bluegrass band “Zink & Company“ as well as his Country band, “Classic Country Road Show” performing at Bluegrass and Classic Country festivals all across the U.S. He also has a local band, JCT 441 based at home in Sevier County playing Classic Country from the 1950s to early 2000. His distinct baritone voice is perfect for his crossover combination of down to earth lyrics and style creating original “Corey Zink” stories in song.

Corey is also available for interviews.

Corey Zink was born in the Berkshire Mountains of Massachusetts, brought up on the Classic Country Music of the greats like Jones & Haggard. In his early teens Corey discovered a new found love of Bluegrass music while listening to the music of bands like The Johnson Mountain Boys and The Lost & Found. Coming from a large family of Musicians, Corey spent most of his free time in jamming sessions at home or at Bluegrass festivals where he was influenced to develop his own style of singing and playing. He quickly became a fixture playing bass, acoustic guitar or mandolin. Studying the greats, such as Jones, has helped Corey become one of the premier baritone voices on the Northeast bluegrass circuit today. Corey is also becoming known for his heartfelt, original, storytelling songs which have become some of his most requested. Honing his skills on guitar and lead vocals, he has become one of the top drawing artists in New England.

“I first met Corey at a concert near Pittsfield, Massachusetts, where we were performing a few years ago. I have gotten to know him well and have seen his group mature into a class act. Corey's desire for quality music and ability to connect with his audience is evident. He has brought Zink and Company to "must see" status. I would highly recommend them for any venue.”
~ Allen Mills, Lost and Found Bluegrass Band since 1973
11
What's This
Advertisement