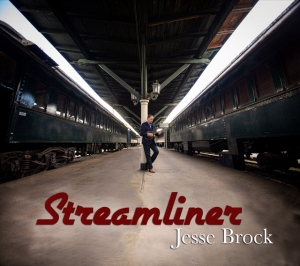 
"I've known Jesse Brock since he was a young fellow playing in his dad's family band and one of the things that has always impressed me is that his playing is infectious! You can see the joy in his face and feel that joy as he translates it through his playing. Jesse offers up a collection of originals songs from various writers as well as a few previously recorded ones and all of them are top drawer listening. Surrounding himself with an excellent cast of players, you are sure to enjoy "Streamliner" to the fullest! ~ Doyle Lawson

Two-time IBMA Instrumentalist of the Year, JESSE BROCK, had some clear ideas going into recording his first solo album in a score. As he tells it, “Closing in on the 20-year mark from my first solo project, I decided to step into the studio once more. You may have expected an instrumental recording, but I produced an all-star band recording.” Streamliner features Bronwyn Keith-Hynes, Jason Carter, Josh Swift, Rob Ickes, Felecia Mikels, Russ Carson, Ron Block, Greg Blake, Barry Reed, and Dale Perry.

“Having spent most of my 39-year career supporting other artists, I wanted to step away and focus energy on my music and instruments I never get to play or even record, for that matter. People have asked, ‘If you were to play another instrument in a band, what would it be?’ I quickly reply, ‘If I wasn’t a mandolin player, I’d be a bass player,’ and I offer up a couple on Streamliner. Rarely do I ever pick up the guitar either nor get to drive the rhythm or solo like I do on mandolin. One example is: ‘I Wonder, Could I Live There Anymore,’ a great Charlie Pride song that tugged at me to lend a style of guitar inspired by Norman Blake. Having always been a Norman Blake and Tony Rice fan, I tried blending their styles together, a cleanliness of melody and cadence.

“I feel Streamliner represents the musician on my own that people have been waiting to hear. From producing, to the execution of several instruments, to singing multiple parts; this offers my vision of the strong, musical roots I grew up listening to. I hope that we never lose the rhythmic drive associated with our traditional bluegrass forefathers and foremothers. Yes, lyrics and times change, yet our foundation can remain strong and unblemished.

“This recording is meant for the wholesome acoustic music lover, no matter what genre. From young or old to all walks of life, I appreciate your support and hope you enjoy the last two years of hard work I poured into this long-awaited venture known as Streamliner.”
Jesse Brock began his bluegrass career with his family band, the C.W. Brock Family, at the age of nine, first appearing on the Grand Ole Opry two years later. He has played mandolin with many of the best bluegrass bands of the last 30 years: The Lynn Morris Band (2 albums), Dale Ann Bradley (2 albums), Michael Cleveland & Flamekeeper (4 albums), Audie Blaylock & Redline (2 albums), and, most recently, The Gibson Bros, and Fast Track.


KISS ON A COLD, COLD STONE - "A hidden gem from the 70’s, this is a co-write between Louisa Branscomb & Geri Byrd. Never offered until now, I chose this beautifully-sad song to grace the album from one of my dear friends, Louisa, whom I met in 1992." ~ Jesse Brock

Mark Brinkman (co-writer with Aaron Bibelhauser) sent me this song amongst others. Written to convey the hardships of an old coal town, it paints a picture of despairing times and working to get out. I like the deep, rhythmic groove this song offers.

I wrote this song to brand my concept band. I am a lover of trains and classic design of the 30’s. Sleekness was the aim for every designer of the age and was depicted in the new, forward lines of the 1937 Streamliner. Yes, there is a double-entendre written throughout. I awoke with this song in my head and written in 20 minutes (as fast as I could type in my “phone notes”).

A highly requested tune made popular & written by Bill Monroe, I decided to finally record it for the fans from encouragement of Russ Carson & Barry Reed. They said, “Put it in the wind!” Hang on!

A Monroe Bros. song from the late 30’s. It originally ended on a sad note and I arranged it to evolve with the storyline and end happily. As it evolves lyrically, so does it musically in the arrangement.

Once again, urged by the youth in the studio, I was coerced into doing one I’ve been known for playing in circles. It is a romping instrumental made popular by the late, great Earl Scruggs. Keeping in the traditional vein, I saw no reason to re-write such a tune and give you our version of clean Bluegrass musicianship.

I’ve always been a fan of Charlie Pride, as is my wife. I wanted to give this a Norman Blake approach on guitar and mandolin. Greg sings with richness and soul on this.

This is a rendering from gospel artists, The McKameys, (of eastern TN.) & is a favorite. Ironically, Greg Blake brought this to the project and my wife knew all about the song, having listened to it for years.

John Lowell is a mutual friend of Greg Blake and myself. He sang this song several years ago while in the band, Kane’s River and was presented again by Greg. I also have the recording from years ago and refreshed by Greg. It is one of few I sing tenor on this album.


A hidden gem from the 70’s, this is a co-write between Louisa Branscomb & Geri Byrd. Never offered until now, I chose this beautifully-sad song to grace the album from one of my dear friends, Louisa, whom I met in 1992.

Greg Blake dropped this in my lap from one of his friends in the Northern Territory. He challenged his friend, while at a songwriting camp, to write a song as part of a contest. This is what came about and is a touching tale of his memories of a loved one.

Greg Blake wrote this elegant song that depicts a true-life, neglected Civil War home. It was built for a loving family and passed down through generations then later abandoned, soon to be leveled. It is now a renovated Bed & Breakfast with a historic past.