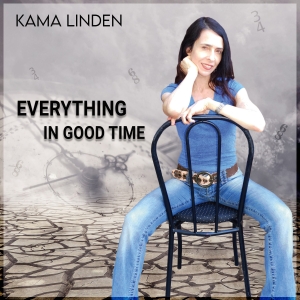 Kama Linden is a fireball of energy, passion, and versatility. This gutsy lyricist draws you in with her edgy lyrics and voice, lulls you in with SMOOTH vocals, and has you grooving with sultry sounds that are undeniably her own. Live on stage, she has gathered many a crowd at various festivals and other venues large and small. Her newest and best music to date, "EVERYTHING IN GOOD TIME", released on June 20th, 2020 on all digital sites, and in CD Format Summer, 2020.

"Everything in Good Time", is above and beyond in quality from her past albums. It is mostly Adult Contemporary, with hints of pop, country, and urban sounds. Her lyrics and stories are reflections and observations. The vocal quality is great, and the Nashville Musicians who tracked her album are top-notch players who tour with A-lister artists. Many tracks have a commercial quality: You're On Video, If I'm Wrong, Your Love Hurts, She's Gone Country, I'm Really Into You, belong in your next film or tv show.
"If I'm Wrong", her 3rd pop/adult contemporary single, had almost 30,000 downloads in September. "You're On Video" had 8,900+ downloads. "Belmar Breezes" had 14,700+ downloads in August.

She spent three years touring the USA (and Amsterdam in 2007) in support of her first release, UNINHIBITED 2006 (a mix of POP/Rock and some urban/dance mixes which keeps the listener both interested and entertained), and has toured the USA and abroad in support of her second album release, BETTER LATE THAN NEVER (which has a balance of fully produced songs, as well as simpler, more acoustic takes). Her third studio album, SOUTHERN COMFORT (2013), along with her children's song single: IT TAKES ALL KINDS(2013), were recorded in NASHVILLE with all live studio musicians.

And now, the long-awaited new studio album, EVERYTHING IN GOOD TIME, which is both a dedication to her Nana, Mom, and love for the Jersey Shore, but the self-reflective, mostly biographical, adult contemporary album you have all been waiting for. Once again, this was recorded in Nashville, under the direction of Master Engineer Rodney Ingle, at MissStyx Studios, thanks to Darla Perlozi. The stellar musicianship of Darla (drums), Timmy Patterson (bass), Tony Toliver (piano), and James Mitchell (guitar) brought Kama's songs to a level never before heard on her past albums, as well as capturing her voice the way it should be recorded.

Although her albums are fully orchestrated, she usually tours as an acoustic soloist or plays with a partner or acoustic trio. Although she most often plays on Eastern Seaboard lately, as well as four concert tours in California, she also has performed abroad in London/Southeast/Devon, Wales, Amsterdam, AUSTRALIA, and Prague. She has performed in many a festival such as SUNBURY RIVER FESTIVAL for four consecutive years, Nashville Songwriter's Festival, Art by the Ferry, Halstead Market Days, FIGMENT, Jersey Shore Festival for three years, Porch Stomp, and the Birdman Festival (UK). Even as a solo act, she’s sure to knock 'em dead for she holds nothing back. She also performs many pop/rock and country covers. Her songs have been licensed to small films; "Another Me" was used for a Blue Cross Radio Spot in California. "Bitter Lemon" was featured on a Radio Show in Nashville called "Sauced" in July 2008: WLAC 1510 AM.

Her song "Crossed Over" from UNINHIBITED 2006 is being featured in a book that was released as a 9/11 remembrance by ArtForHealingNYC.Org. She also plays at many benefits and Charity Events.

Her songs are dominating, sexy, and will make you think and feel about the human experience. And now, with "EVERYTHING IN GOOD TIME", the music was worth the wait.