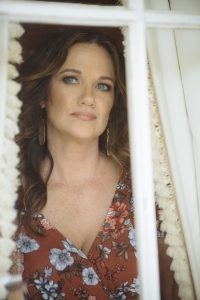 A native of Hickory Grove, Louisiana, Alecia became the lead singer of her dad’s group, The Southland Bluegrass Band, when she was in her teens. She went on to record three albums for Rounder Records in the early 2000s, toured the U.S. extensively and performed shows in Switzerland, Italy, Scotland, Ireland, Germany, Austria, Netherlands and Canada as well. THE OLD SIDE OF TOWN is her first release in 10 years. Now based in Nashville, Nugent was awarded SPBGMA Female Vocalist of the Year honors in 2007, 2008, 2010, 2011, and won the IBMA Album of the Year award for MUSICIANS AGAINST CHILDHOOD CANCER. She has performed over 70 times on the Grand Ole Opry.


Alecia Nugent is embracing her roots in classic country on The Old Side of Town, her first collection of new music in 11 years. Already familiar to bluegrass fans through three albums on Rounder Records, Nugent turned to producer Keith Stegall and a number of Nashville’s most accomplished studio musicians for The Old Side of Town – where the fiddle and steel guitar are perfectly matched to Nugent’s emotional vocals, original songwriting, and hard-won perspective.

While The Old Side of Town is a departure from her bluegrass albums, it isn’t a stretch to hear Nugent singing these classic country songs. She cites Merle Haggard and Reba McEntire as her greatest influences, and with one listen to the country shuffle “Tell Fort Worth I Said Hello,” it’s clear that Ray Price and Connie Smith are on that list of heroes, too.

Asked what she’d like her bluegrass fans to know about The Old Side of Town, she replies, “That it’s still me. We may have changed some instrumentation on this record, but the songs are still songs about life. I’ve always gone down that road. I’ve always tried to pick songs that are meaningful, and songs that people can relate to. I hope they don’t judge the fact that there is no banjo and that there’s a lot of steel guitar. I think for the most part, most people who enjoy bluegrass music are also interested in classic country, so this record’s just me, letting my roots show.”

The title, Hillbilly Goddess, was given to Alecia by Robert K. Oermann of Music Row Magazine in a review of her previous recording (A Little Girl... A Big Four-Lane), then led to a song written by Nugent, Carl Jackson, and Sonya Kelly Rutledge. The song is a clever, witty number (with JD Crowe on banjo) which turned into a radio favorite.

There is a great deal to admire about this album. It is a great example of how much can go right with a recording when a group of extremely talented people are involved at multiple levels. Jackson has produced two previous albums for Nugent, both stellar works, and this one is no different. The audio fidelity is brilliant and the backing musicians superb.

Every song is a gem and Alecia sings with authority, passion and grace. The production and arrangements (as per other Carl Jackson-related releases) owe much to the way modern country music is recorded. For instance, there are two acoustic guitar tracks on almost every song (Tim Stafford and Andy Falco) and subtle percussion is also found throughout.

For all that, however, the sound is acoustic and when not distinctly bluegrass, is always informed by the traditions that Monroe, Flatt & Scruggs and The Osbornes left us, with touches of “real country” music. Adam Steffey is on mandolin, Andy Leftwich on fiddle, Thomas Wyrot on banjo, Rob Ickes on resonator guitar, Kevin Grant on bass and Todd Creasman on drums.

Click here to go to Alecia Nugent - A Little Girl... A Big Four-Lane

Alecia Nugent continues to elevate the art of country singing with her second album, A Little Girl...A Big Four-Lane. Pouring her heart into every note, Nugent delivers one enchanting, poignant performance after another across an expertly chosen program of eloquent new compositions from some of Nashville's finest songwriters. Joined by Grammy Award® winning producer and songwriter Carl Jackson and a remarkable cast of supporting musicians, A Little Girl...A Big Four-Lane is acoustic country music at its most emotional, soulful, and moving. Featuring special guests Alison Krauss, Rebecca Lynn Howard, Doyle Lawson and Cia Cherryholmes.

For a first-time effort, "Alecia Nugent" is a profoundly personal album. The disc's 11 offerings, each carefully selected by Nugent, capture the range of emotions she experienced while recording it in late 2000.

"I was dealing with some serious personal issues at the time," Nugent reveals during a telephone interview from her home in Hickory Grove, La. "I'm a private person; it's only when I sing that I can really open up."

Nugent's "therapy," out March 9th, is a vibrant collection of classic and new bluegrass-oriented material that she believes reflects the heartbreak, and ultimately, the triumph of those times.

Nugent was born and raised in Hickory Grove, a tiny rural crossroads in the northern half of the state. Her father, Jimmy Nugent, and his cousins formed the popular and enduring regional group Southland Bluegrass Band in 1972, the same year Alecia was born.

"Growing up, we lived and breathed bluegrass and southern gospel music," she says. "There's not a big bluegrass scene in Louisiana, so it was more of a hobby for us. Daddy always held down 40-hour-a-week jobs, and we all traveled with him and the band on weekends."

Nugent recalls "even before I actually joined the band in my early teens, Daddy would get me on stage to sing with him. The first time I heard that applause, I was hooked!"

Throughout the 1990's, Nugent juggled Southland Bluegrass Band performances with the responsibilities of marriage and motherhood. "They were tough years, and my three girls - Meagan, Santanna and Breanna - always came first. At the time, I was doing all I could do with my music - but not all that I wanted to do."

Those weekend gigs paid off, however, when she began to attract the attention of people who would later help her realize her dream of a solo career. Among those who were impressed with Nugent's direct, down-home vocal style were festival producer Johnny Stringer and his wife, Peggy.

"They are incredible people," says Nugent. "They love bluegrass music and really want to help people they think can do something with it."

It was at a 1998 festival in Elba, Ala.. that Stringer asked headliner Rhonda Vincent if she'd mind doing a number with Nugent. Vincent agreed.

"After all," Nugent laughs, "he was the promoter! I went backstage with her, and we worked up an arrangement of 'Have I Loved You Too Late,'" she recalls. "The crowd went wild. We got a standing ovation and ended up doing an encore, the Carl Jackson song 'I'm Not Over You'."

Later, at a "Legends of Bluegrass" festival in Columbus, Miss., Stringer offered to back Nugent on a solo recording project. He gave her the freedom to "'go get whomever you want to produce it'."

Someone else who had been following Nugent's blossoming career was veteran bluegrass performer-songwriter-producer Carl Jackson, whom Nugent first met at a songwriters' in-the-round in the mid-1990s. He, too, recognized something special in Nugent's talent, and had kept in touch with her over the years.

With Stringer's commitment to underwrite her studio time, Nugent's first call went to Jackson. He immediately agreed to produce the project. Jackson then set about rounding up a bluegrass supergroup to back her: Ben Isaacs on bass, Aubrey Haynie on fiddle, Randy Kohrs on Dobro and Ronnie McCoury on mandolin. Vincent, Rebecca Lynn Howard, Larry Cordle, Jerry Salley and Sonya Isaacs all agreed to help Jackson on harmonies.

Nugent and Jackson collaborated on finding the right material, but ultimately Nugent made the final selections. Once the sessions began, she says everything fell easily into place. '

Nugent self-released her CD in February 2001 and "mailed it out to just about every disc jockey in the country" she says. She was starting to get so me radio play, when "Carl played it for Eddie Stubbs, the Grand Ole Opry announcer, and he was impressed enough to believe I needed to be introduced to Ken Irvin from Rounder."

That came about at an International Bluegrass Music Awards post-awards party. Even though "it took a while", Irwin and Rounder Records "finally came around," she laughs. The label signed her on in September 2002.

The following month, Rounder invited her to record "Beautiful Star of Bethlehem" for "O Christmas Tree," a holiday compilation. That album started the buzz about this "new" talent (who had been performing for two decades!). Rounder repeated the strategy by including Nugent's "You Don't Have to Go Home" from her CD in their 2003 gospel compilation, "White Dove."

With Nugent's cuts comparing well with Rounder veterans on two well-received collections, the label was ready to re-release her solo effort.