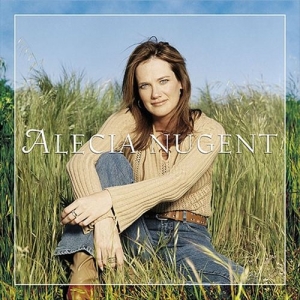 
I've had the honor and privilege through the years to sing with so many of my heroes. Among those are some of the greatest female vocalists to ever sing a country or bluegrass song. After folks have had the chance to hear this CD, they'll all say to me how proud I must be to have been able to perform with the likes of Emmylou, Dolly, Linda, Rhonda, Alison, and Alecia. They'll be right...she's a singer that truly deserves first name recognition - Carl Jackson

Producer Carl Jackson asked one day if I could listen to a couple of tunes by a new artist he was producing. Knowing I'm quite difficult to impress, Carl promised he wouldn't be wasting my time. He could not have been more correct about the artist, who happened to be a young lady from Louisiana. What I heard really moved me. So much, in fact, that I stated that both she and this collection were destined for female vocalist and album of the year awards.

Alecia Nugent possesses one of the most honest, refreshing, and believable voices I've heard in many years. There is no substitute for life experience, and much of what Alecia sings about, she has actually lived. Her full volume, open throat approach to singing, along with the great selection of material, coupled with the first-rate production of this, her debut release on Rounder, will undoubtedly win her countless fans. - Eddie Stubbs, WSM Grand Ole Opry Announcer

Aubrey Haynie's jaunty kickoff sets the tone for this upbeat farewell to a wandering lover, an old favorite Alecia brought to the session. It comes from Flatt & Scruggs' November 21, 1950 recording session - their first for Columbia Records.

Though the lyrics to this desolate story don't give away the narrator's sex, its classic country construction seemed indissolubly tied to a male voice after Lou Reid's powerful reading of more than a decade ago - that it, until Nugent's bold, insightful remake. "You get used to that family harmony," says Alecia of Roy and Jimmy Nugent's contributions, "and its hard to find that blend elsewhere."

Written years ago by Jackson and the late Chris Austin, for whom the prestigious Merlefest songwriting contest is named, "If Your Heart Could Talk" features stunning harmonies from Rebecca Lynn Howard. "I've known her sine she was fourteen or fifteen," the producer says. "She's one of the most talented singers in town, especially when she sings that kind of song. I thought it would be a great blend because of the edge on their voices."

A huge hit for Tex Ritter at the end of 1944, this durable country lament also received a fine reading from Johnny Rodriguez on his 1973 debut. Here it gets a distinctive arrangement by Jackson, that adds a modern, yet still thoroughly country touch.

Another staple of Alecia's repertoire, this quintessential Stanley Brothers number was first recorded in 1958.

A waltz that has the emotional and literary impact of a short story, "Paper and Pen" opens in a spare, intimate setting, reserving its full strength for the powerful, rhythmically accented choruses. Here Alecia is backed by Cordle and co-writer Jerry Salley, who - like Jackson - have known her for years.

Prominent dobro adds an extra measure of country feel to the cleverly contrasting rhythms of "But I Do's" verses and choruses, written by Tibby Edwards, a Louisiana artist who alternated between country and rockabilly stylings in the 1950's.

The album's only full-blown duet with Jackson, "For Love's Sake" first appeared on Doyle Lawson & Quicksilver's 1992 album, Pressing On Regardless. Here, the elegant passing chords of Jackson's arrangement give the song added depth and subtlety.

Alecia teams up with Rhonda Vincent and Sonya Isaacs to create a breathtakingly high, rich trio on one of Larry Cordle's most memorable gospel songs. Restrained, tasteful backup by Haynie, McCoury and Kohrs keeps the focus where it belongs - on the song's gently cautionary message.

Jackson's friend and colleague, Mike Ward provided this catchy story, which returns to the train imagery of "I'll Stay Around" - this time with a mournful twist.