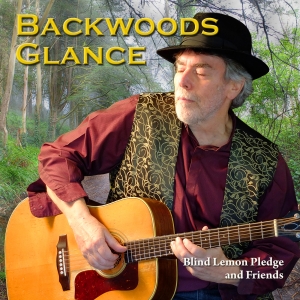 Called by one critic “a national treasure” and with previous albums hailed as “masterpieces” by others still, Blind Lemon Pledge steps out of his Blues Shoes to explore the world of Americana, Folk and Country music on his new album Backwoods Glance.

When James Byfield retired from his wide ranging, award-winning career as a graphic designer, animator, multi-media producer and creative director, he embarked on a fresh, exciting musical adventure. Drawing on musical influences going back to his first forays into Roots Music. he created the musical persona “Blind Lemon Pledge.”

As the retro yet edgy Blind Lemon Pledge, he explored his passion for “country blues” of pre-WWII icons like Son House, Bukka White and his namesake, Blind Lemon Jefferson (with a tip of the hat to an old Martin Mull routine). In 2008, he formed the eponymously named Blind Lemon Pledge blues band and built a fan base as he performed around California with a unique combination of classic blues, old time jazz, reimagined rock and pop tunes and his critically acclaimed original songs. At the same time he recorded a series of highly regarded solo albums. Now, after a nearly decade long discography exploring a multitude of blues-related styles, Pledge is taking a ‘Backwoods Glance.’

Since childhood, Byfield has been deeply involved with music. He wrote his first song at 8 years old and began a life-long love of melody and lyrics, and the magical synergy between the two. At 14, he picked up his first guitar and discovered “country blues” which has been a major influence ever since. Over the years, he experimented with a variety of musical forms including Blues, Jazz, Country, Folk and Rock ‘N’ Roll, with the occasional detour into Classical and other forms…even Chinese Classical, learning the er hu a two-stringed Chinese fiddle.

He gained his first critical attention with Blessed Be the Lord, credited in a Time Magazine article as the first use of hard rock music in a liturgical setting. Under the aegis of Grace Cathedral in San Francisco, Byfield toured with his Rock Mass across Northern California, gaining press coverage, a certain notoriety and a love of new and unusual directions in music.

After graduation from San Francisco State University, Byfield played music in a wide variety of milieus for the next several years, both in band settings and as a solo performer. His career in a wide variety of professional media (graphic art, professional writing, production and media design) has enabled him to become a one man indie production company, creating and producing his original music, the associated graphics and videos for his various projects.

In 2009, he completed his first solo LP Livin’ My Life with the Blues, which combined classic blues songs with his originals, all set with the sound of an old-time blues string band similar to early Muddy Waters, Sleepy John Estes, and the Gus Cannon Jug Band among others. This completely self-produced and self-recorded album received international airplay and was named one of the Top Blues Albums by KPIG Radio.

In 2010, fronting an acoustic blues band, he released a second album of material under the Blind Lemon Pledge moniker. The album I Would Rather Go Blind has a clean, spare sound with guitars, keyboards, harmonica and bass. This album is a combination of blues and originals with a couple of reworked pop classics such as The Rolling Stones “No Expectations” thrown into the mix. This album also received international airplay and was again cited by KPIG Radio, as well as being listed in the top 100 singer/songwriter albums by iTunes Ireland and iTunes Austria. The album continues to sell CDs and downloads to this day.

2013 saw the release of Against the Grain, this time featuring all original tunes with a different grouping of musicians, and including everything from Folk Rock to Swing to Southern Gospel. The diversity of styles set the stage for his next two Blind Lemon Pledge releases. Blending his Blues and Rock influences with Jazz and American Songbook techniques, Byfield’s 2014 release Evangeline received international radio play and world-wide critical praise including a well-received review in Blues Blast Magazine. His music has been described as “Muddy Waters meets Hoagy Carmichael meets Randy Newman meets Bob Dylan.” And critics have noted his ability to deftly handle a wide range of styles and techniques while praising his instrumental prowess.

In 2016, the unique musical vision of Blind Lemon Pledge emerged anew with the release of Pledge Drive. With a harder, more electric sound than his previous albums, “Pledge Drive” captured the energy and exuberance of Pledge’s many years playing Rock ‘n’ Roll. It received worldwide critical praise and three spots on the Grammy nominating ballot.

Now in keeping with the myriad of eclectic influences that have shaped his recording career, Blind Lemon Pledge is delving into the Roots Music world of Folk, Americana and Country with his new collection Backwoods Glance. With stylistic swings from Folk to Country to Cajun to Gospel, James Byfield is once again proving his command of musical styles and showcasing his unique and varied musical vision.