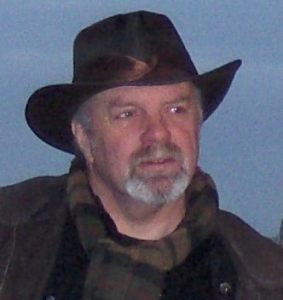 Celtic singer/songwriter, Raymond McCullough, has been writing songs since 1973. He plays guitar - 'a George Lowden acoustic/electric; actually!', mandolin, bodhran and, sometimes, a bit of keyboard.

He has travelled and performed in Israel, (literally busking for his supper, on one occasion!), China (Beijing), Canada, USA, Scotland and Ireland, north and south - playing pubs, concerts, churches - on the street, if required! At the Rostrevor International Festival in Ireland recently he was described by one of the organisers as "the discovery of the festival!"

He travelled to the People's Republic of China in 1999 - their anniversary year - to take part in a charity cycle event, organised to raise funds for MenCap. "Friends said just because I'd gone to China, I didn't need to make a song about it - of course, thats exactly what I DID do!" he says. The 11-verse saga, 'Ballad of Beijing', unfolded bit by bit over the two weeks he spent there.

"As we flew over the Mongolian mountains into Beijing, I just happened to be talking with the beautiful Irish girl who had the seat next to me - about my music, of course! - when a little tune came into my head and sort of stuck there. I added a traditional Chinese rhythm, which I heard performed every afternoon on the streets of Beijing, on Taiko drum and two cymbals - and the words just seemed to write themselves!"

When he returned home he spent the best part of the next month in his son's studio, just recording that one song - he nearly drove the engineer mad! He then spent the next month adding another three to make up the mini album, 'The great China Bike Ride'.

Raymond has had a very varied career; including lecturing in computing, selling French perfume, running an Internet cafe, publishing a magazine and two books, hosting his own radio show, producing TV and corporate video, and restoring his own classic wooden boat.

!!NEW ALBUM!!
He has recently released a new full-length album of Celtic and Hebrew music - 'Into Jerusalem'. This album was released in Nov. 2005 and contains rock anthems, bluegrass gospel, Celtic jigs, reels, marches, hymns and slow airs - plus 3 Jewish/Israeli-style laments.

You can listen to all tracks now at: http://www.preciousoil.com/music/into_jerusalem.shtml

In 1990, he set up Precious Oil Productions - now limited (incorporated) - a company involved in documentary TV, radio, music and media production. He has just returned from Israel - where he was travelling with a group of Inuit and First Nations from Canada - and is currently involved in a TV documentary (about Native Americans), three radio shows, with a single and a third album in the pipeline!