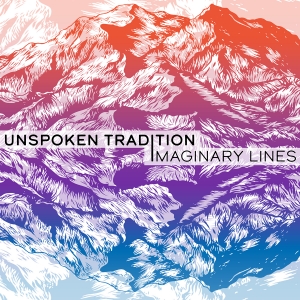 Western North Carolina bluegrass powerhouse Unspoken Tradition were just starting to map out a follow-up to Myths We Tell Our Young, their head-turning 2019 album, when Covid-19 blew up a highly-anticipated 2020 touring season and temporarily put their plans on hold. Even so, the quintet kept their collective cool, retooled their approach and began a string of recording sessions that generated six charting singles over the next 20 months, and now culminates with the June 10th release of Imaginary Lines, their latest full-length album for Mountain Home Music Company.

The collection shows that Unspoken Tradition not only survived, but thrived during the enforced hiatus, using the time to take new risks in exploring new sounds and songs. Bringing aboard veteran bassist/singer Sav Sankaran and producer Jon Weisberger, the group stretched their collective horizons in ways both obvious and subtle, from the deployment of fiddle and bowed bass to simulate a string section on #1 hit, “California” — co-written by GRAMMY-nominee Thomm Jutz — to a searing take on Dominic Behan’s riveting coal miner’s take, “Crooked Jack,” that features legendary Irish singer/guitarist John Doyle, to a brightly spirited cover of “The Old Swinging Bridge,” a staple of the Pennsylvania/Maryland bluegrass scene in which Sankaran came up.

As they have from the start, the band — Sankaran, guitarist/vocalist Audie McGinnis, brother Zane McGinnis (banjo), mandolinist Ty Gilpin and Tim Gardner (fiddle, vocals) — ranges beyond typical lyric themes to dig into songs about work (“Irons In The Fire,” “Back on the Crooked Road”), reaching out across boundaries (“Carolina and Tennessee”), the changing nature of Appalachian communities (“Soldiers of Dust,” “Lookout Mountain”) and more. Rich instrumental work underpins lead vocals from McGinnis and Sankaran, who take turns harmonizing with one another in a way that, paradoxically, encourages attention to each song’s theme even as it demonstrates the singers’ individual and collective versatility. As Zane McGinnis notes, the result is that “the work put forth on this record represents the malleable nature of Unspoken Tradition as a band, with numerous musical influences united to produce our finest project to date.”

“Imaginary Lines tells a story of overcoming the barriers that have kept people from understanding the struggles their neighbors go through,” adds Gilpin. “The song ‘Carolina and Tennessee’ sings of boundaries as ‘imaginary lines’ that keep us separated from each other. It’s a metaphor for our relationships at a time when those relationships are more important than ever — and it’s also a useful metaphor for the music of this collection. The intent was for us to push our own boundaries, and not be constrained by what a bluegrass band is supposed to sound like. All that really matters are songs that people can universally relate to.”

Rooted in the fiercely distinctive culture and landscape of western North Carolina and deeply committed to blazing their own trail within the larger music community, Unspoken Tradition have, in the words of the title track, “walked in the shadows of hard times, waiting for the sun to shine” — and now, this collection announces, the waiting is over.