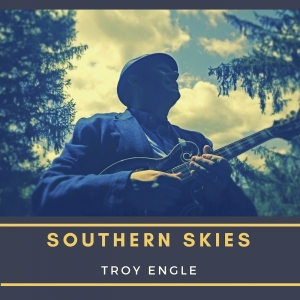 
Troy Engle is a Grammy nominated singer, songwriter, studio musician, and composer.  He spent 12 years in Nashville, TN, playing venues like the world famous Grand Ole Opry and touring and recording with artists like, Patty Loveless, Buddy Jewell, The Isaacs, Larry Sparks, Eric Church, and Leon Russell. Troy is also an award winning songwriter, writing several Bluegrass #1 songs with writing partners Dixie and Tom. T Hall. Many of his instrumental compositions can be heard on TV shows like The Voice, American Pickers, Duck Dynasty, and many more.


In 2015 Troy and his family relocated back to his home area in Glen Rock, PA, and began the next stage of his musical life, a career as a solo artist. After 20 plus years as a sideman to many of the best acts in Country and Bluegrass music, Troy has just finished his first solo Bluegrass album, “Southern Skies”. It is all original music, with Troy writing all 12 songs, and co-writing one tune with his wife, Mandy. If that wasn’t enough, Troy sings all the parts on the album, plays guitar, mandolin, banjo, fiddle, dobro, viola, cello, upright bass, and percussion, on the project, as well as recording, and mixing it! Troy and his crack band “Southern Skies”, are excited to share these new songs, as well as some timeless favorites, while making new friends and fans! You can visit Troy and the band online at www.TroyEngle.com.

Elizabeth Engle-Harmony vocal on "You Can Go Home"

I don’t remember exactly what year I wrote Southern Skies. I think it was sometime around the age of 18, way back at the end of the last century. I do remember coming up with the song while riding down Interstate 81 in Virginia, en route to visit my dad’s family in Eastern Kentucky.
It’s funny that I wrote it from the angle of leaving the city behind up North, and heading for the peace of the South, which is something I always wanted to do as a kid, though I did just the opposite a few years back, leaving behind Music City for the peace and comfort of Pennsylvania!
It was a popular song when I recorded it with the Mark Newton Band, so I definitely wanted to include it on this album, and decided it would also be a great title cut and band name!

This a very recent song. I was reminded of C.S. Lewis' "Screwtape Letters", which describes a worker of the devil that was assigned to an earthly human being to disrupt and confound his "patient".
I also read Steven Pressfield's "The War of Art", which describes "The Resistance" (which I identified as the devil), which uses everything in it's power to keep us from doing what we are called to do.
While preparing this album, I could surely feel the powers of "The Resistance" trying to keep me from doing it. But I found great peace in knowing that the harder the devil is trying to keep something from happening, the more important it is to do it. Thank God I don't have any chemical "demons" in my life (except maybe Turkey Hill iced tea), but for those who do, maybe they can relate to this song as well.

3) DAYS BETWEEN THE DUST

This is another recent one. Bluegrass DJ and MC, Dennis Jones shared a quote from the late George Shuffler ( of Stanley Brothers fame, and an innovator in his own right) and the words really stuck with me. George said "Well...you know....we come from dust and to dust we'll go back. You just thank The Good Lord for every day you get between and try to do our best." So I thought...Days Between The Dust...yes! I grabbed a piece of paper and let the Lord control the pen, and this is what came out. Thanks George!

This is a "Mama" song I wrote a few years ago. Thank the Lord it's not autobiographical! I was googling a friend, and the first thing that came up in the search was their mug shot. I was shocked, and I
could only imagine how their mom must have felt. I've never been in that kind of trouble, but I did have a mom who "raised me right", and I thank the Lord for that. Listen for a little nod to another "Mama" song at the end. This one’s for you, Mom.

The line “She was just an old lady
standing out in the rain.”, came to me one day as I was picking my kids up from the bus stop. I didn’t know her as well then, but she was a grandma that would walk to the bus stop every morning, in the rain, snow, heat, cold, etc She’d then walk a mile to her job, work her hours, and be back in time to pick them up in the afternoon. It came to me that she was keeping things together. Our world is held together by people who everyday, do things that they really don’t have to do, but they do them out of love, and dedication. We all have people in our lives, who have made the world a better place to live, by giving selflessly. I took a little poetic license with her story, but this one’s for you miss Helen, and no I don’t think your an “old lady”.

This song was written about my Dad’s parent’s old house in Eolia, KY. They never owned their own home, they rented it from the coal company. It was the house we’d visit, and stay at, on our visits to Kentucky, when I was growing up. When I was older they moved to another house, and the old house, was torn down, but this is the homeplace in my mind. That part of Kentucky has always been magical to me. Bill Monroe used to say you could hear the music coming out of the hills, and it really seemed liked you could hear it there, the hollers were sort of whispering to you. To calm down and focus, experts say you should visualize yourself in your “happy place”, and this is always the place I picture. What I wouldn’t give to sit one more spell there on that front porch swing.

I always hunt for instruments on craigslist, and one day I found a pedal steel I wanted to buy. When I showed up to buy it, I found out that the lady selling it was the owner’s mom. Her son was a musician, who was actually younger than me, but had died tragically on a hiking trip. It reminded me of the several instruments, that I am the current caretaker of, that came from people who are no longer with us. All we have is their memories, and their guitars, but that’s all we need to keep them close to us. I like to think that they ( and all of us someday ) will live on through their music and their guitars. Thanks to Jason Parish, Jim Bond, Ralph Niece, and Miss Dixie Hall, for passing along their instruments and their music.

I had the chorus for this song in my head for several years, but it wasn’t until a recent trip down I-81 in VA, that I actually came up with some verses. Years bouncing around in my brain, and the verses came in about 15 minutes! It was early spring, and we were leaving the “frozen North” behind us. When we lived in middle Tennessee, springtime was my favorite season (all two weeks of it!). This song also makes me think of Miss Dixie, and Tom T. Hall’s farm, “Fox Hollow”. Another magical place, and it really showed out its grandeur in the spring!

9) LIGHT IS THE CROSS

I’ve been getting a lot of song ideas lately from Facebook. I checked in one day to see that a bluegrass artist that I had been a fan of for several years, was not doing well health wise. His name was Ernie Thacker, and you would definitely do yourself a favor picking up his “Chill of Lonesome” cd, if you can. He was a great singer and musician in the Stanley tradition. He basically posted that he was not long for this world, and was giving his final “farewell”, and a short while later, this would be found to be true. It just hit me, that we often think our lives are so rough, and that what we have to endure is so terrible, but in reality, there are people out there that would gladly trade our “minuscule” problems, for the pain and the heartache that they are facing. I often forget how amazingly blessed I am. This one is in honor of Ernie.

10) SNOW ON THE MOUNTAIN

This is an oldie, written around 1996, I believe. I was riding shotgun in Penn-Del Mountain Boys bandmate, Jim Good’s old work van, crossing the Susquehanna River. I remember seeing the snow on the hills overlooking the river, and the line “When the snow is on the mountain, I’ll be coming home”, came to me.
Once again there is the theme of longing for the mountains, but this time with a Patriotic twist. I send this song out to all of those who have given the ultimate sacrifice for our country and our way of life, and to all of the folks who continue to put their lives on the line for us every day. You are all braver than I could ever be...thank you!
Pictured is a vintage guitar case that I wish I would have kept, that was owned and decorated by a US soldier during WWII.

My wife Mandy is the one who came up with this tune. It wasn’t long after we were married, way back in 1998, that she said “Come in here, I wan’t to see what you think of this.” Well, on her word processor (ancient technology) she had typed out the chorus to this song. I told her, “That could definitely work!” I worked on the verses, and we came up with the lonesome story of the poor fellow in the song. Another song about heading to the mountains! This is also one we recorded with the Mark Newton Band, but this time I get to sing it. I do remember Mike Munford and I coming up with the fun little arrangement at the end.

My wife and I prayed for several years, about leaving Nashville behind, and moving back home to be closer to our family in Pennsylvania. We loved the 12 years we spent in Tennessee, and I was blessed to be involved in a ton of musical situations I could have only dreamed of. But, I was at a place where I was happy to be off the road, and could record and compose remotely, virtually anywhere, so we said “why not go home”.
We were at the wedding of songwriting buddy Jerry Salley and his wife Erin, and we ran into Lisa Shaffer (another great singer and songwriter). She and her family had moved back home from Nashville, and I remember her saying, “They say you can’t go home....but you can.” That really stuck with me. You have to follow your dreams, and go where God leads, but like Dorothy says “There’s no place like home.”
8
What's This
Advertisement