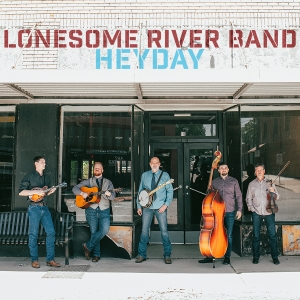 Few bluegrass groups have been around for forty years, and even fewer have been more popular, more widely admired or more influential for as long as Mountain Home Music Company recording artists, the Lonesome River Band. By the early 1990s, they were winning key awards and topping the charts, and while members have come and gone, the quintet’s reputation for crafting essential, archetypal bluegrass has only grown with each passing year.

Now, the bluegrass powerhouse is releasing a new album, Heyday, surrounding four hit singles with a set of songs that serves both to introduce new members and to extend the group’s influential legacy still further. The album is now available for pre-order, add or save ahead of its July 22 release.

Leading off the project is the group’s first single — and first #1 — of 2022, “Mary Ann Is A Pistol.” Sung by new member Adam Miller (mandolin), the song, written by long-time Nashville Songwriters Hall of Famer Dennis Linde, is a sly subversion of stereotypes first recorded over a quarter of a century ago and reclaimed from the record collection of bandleader and award-winning banjo player Sammy Shelor.

Miller shares lead vocal duties with veteran mandolinist-turned-guitar player Jesse Smathers, who led on last year’s “Cumberland River Shore” (a song suffused with the spirit and sound of the late and legendary John Hartford). The lineup is rounded out by Shelor, iconic fiddle player Mike Hartgrove and new bassist Kameron Keller, and blends to perfection the group’s signature “bluegrass with a rock ’n’ roll attitude” sound with fresh energy and new influences.

The result is a collection that leans strongly toward new songs — banjo legend Jimmy Arnold’s retelling of “Jesse James” and Jim & Jesse’s homespun “Tell Her Lies and Feed Her Candy” are the only covers here — that offer vivid sketches encompassing nostalgia (title track and next radio single “Heyday”), wry looks at love (“Love Songs”), old-timey romps (“Come On Down From The Mountain Top”), stern apocalyptic warnings (“Gabriel’s Already Standing”) and, of course, plenty of heartbreak and ramblin’ (“Waitin’ on a Train,” “Bye Bye Love,” “Headed North”). Lonesome River Band may be reaching middle age, but Heyday is here to say that, in some ways, they’re just getting started.

“Heyday is a representation of the Lonesome River Band in transition from many years with Brandon Rickman and Barry Reed in the band to the introduction of Adam Miller and Kameron Keeler as the newest members,” says Shelor. “After 40 years in the business, LRB is looking forward to many more years on the road bringing new music to our wonderful friends across the country. We hope you enjoy this collection!”
37
What's This
Advertisement