Hugh Phillips - It's Been A Long Time 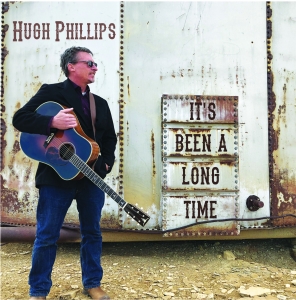 Carbondale, COLO. [November 9, 2020] The buzz around Hugh Phillips’ freshman release is palpable, almost a year in the making it is finally ready incredibly, during this crazy time in music. “It’s Been A long Time” released October 31st through String Kitchen Music, features 12 of Hugh’s finest songs, presented in a vintage Country Americana sound that is unique and flavourful as it is musically diverse. Download here for fans.

“We just sat down in the studio and laid down the tracks as a whole band, and everything just flowed” said Hugh Phillips. “we had so much fun making this I hope our fans have fun listening to it” He goes on to say, “thank you to all the DJs and fans for the support.”

The new album was precluded by two singles the first being “Hydrocarbon Heaven”, a story of an oil town in eastern Utah that is all but gone. The tale is graphically laid describing the ability to pass it by as a non-place with its crumbling buildings, tiny population, and sparse landscape. It continues to relate how it is for sale and home only to river rafters and rats. The writing is complimented by a musical journey that relates the towns vintage existence through inventive pedal steel and guitar work describing musically the vast landscape of the desert southwest.

The second single “Sunset for A Cowboy” relates to a man and his horse story. The metaphor of spending life in the western rangeland that Phillips knows well having lived in Colorado 35 years. In describing the life of an 80-year-old cowboy whose horse just died, the story is equally a story about things that matter most in life: family and friends. The combination of pedal steel and a ripping guitar solo halfway through the song relate the depth of the loss and emotion revealing a distinct release sure to grab the listener.


Hugh Phillips recorded the entire album at Dark Shadow Recording in Goodlettsville, Tennessee. He said “for my first release I wanted to have access to musicians that know the sound I was looking for” he goes on, “and Nashville has those players, many of whom I know” The whole project was produced by Stephen Mougin, who just received IBMA 2020 Sound Engineer of the Year Award, and mastered by the expertise of David Glasser at Airshow in Boulder Colorado.
Some of the best listening is had by the opening track “The Big Show”. One of Mougin’s favourites of the record. A story penned about the losing of friends and family either by them passing on or just simply not being around in one’s life. The musical distance paints an emotional picture that showcases the lyric perfectly allowing the listener into the depths of the song.