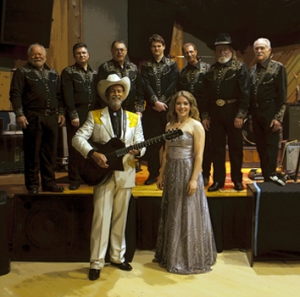 
Wayne Taylor - Biography
Wayne Taylor is a retired US Navy musician of 25 years. He was the lead vocalist/guitarist for the US Navy Band’s “Country Current,” country/bluegrass group from Washington, DC. Wayne also was the front man for the Navy's 7th Fleet Band “Orient Express,” in Yokosuka, Japan.

His vast experience led him to perform engagements the world over, performing in all 50 states, playing the Grand Ole Opry, White House for four US Presidents, for the King and Queen of Sweden, China, Halifax Nova Scotia, Korea, Philippines, Mauritius Island, Hong Kong, and Midway Island. After retirement from the Navy, Wayne formed the Bluegrass Band, “Appaloosa.”

He has recorded 15 CD’s, rising him to fame across the radio waves of the USA and abroad. Reaching out to a more diverse audience, in 2016 Wayne formed “Wayne Taylor’s Great American Country Band,” with a group of seasoned musicians who share a deep passion for real country music. These professionals have played along side and shared the stage with the likes of Randy Travis, John Conlee, Vince Gill, Bobby Bare, Lee Greenwood, Bill Monroe, Alabama, Asleep at the Wheel and many more.

His goal for this Vol. 1 double CD compilation is to feature the music of Patsy Cline, Hank Williams Sr., Don Gibson, George Jones and Tammy Wynette. While staying true to the style of these legends, Wayne and the band present these legendary artist in their own unique, contemporary arrangements.


Liner Notes:
First we would like pay our respects and dedicate this work to Ron Ownbey, the man who made this project possible. God Bless you Ron, heaven just received one special angel.

The title of the “Legendary StudioEast” was penned by Timothy White, a young executive with Westwood One, who later became Editor in Chief at Billboard magazine. We were selected for this honor because Timothy researched the history of the studio and was impressed with all of the artists and hit records that were recorded here, beginning with “Papa’s Got a Brand New Bag” by James Brown in 1964.

The studio, previously called The Arthur Smith Studio was owned and operated by Arthur “Guitar Boogie” Smith. Needless to say, the studio was always recording all of Arthur’s guests and friends, like Johnny Cash, Chet Adkins, Roy Clark, Flat and Scruggs, and literally hundreds of national artists.

I was just a kid that used to hang out from time to time until eventually; I became a studio musician and engineer. In 1985 Arthur turned the day-to-day operation over to me and made a deal where I could own the studio.

The studio was named StudioEast and Arthur made sure that all of his projects and his “buddies” kept coming my way. Through this alliance, the studio was afforded the opportunity to work with countless national Grammy Award winning Artists. I feel that it’s important to share this information about the studio.

Although this facility has been blessed with some incredibly talented folks, none were more enjoyable than Wayne Taylor and his band. Wayne is among the greatest singers and guitar players that ever entered this recording studio. For 21 years Wayne performed all over the world and for four United States Presidents while serving in the US Navy Band’s Country Current.

Wayne has performed on shows with other great artists including, Lee Greenwood, Vince Gill, Bill Monroe, Larry Gatlin and Bobby Bare just to name a few. It was an honor to work on this project with Wayne and to call him my friend. I am also proud to call the rest of the folks in his band my new family.

As you will hear, these singers and pickers have been around. I’ll start with the exception Cortni Bazzle, a lovely young lady that got her “chops” in the church. It’s always a joy to see such a great young singer blossom. She is truly blessed with a great voice and sweet personality. I look forward to having the opportunity to work with her again.

Next, I want to recognize Grayson Drum, the band’s fiddle player. Grayson has only been playing fiddle for five years and “holds his own” with a group of great pickers. Well done my boy!

The first thing a producer looks for is a solid foundation. I knew when I hit the record button on the first song that we had that “in the bag”. With the combination of Greg Simmons on drums and Willie Hall on Bass, the question was quickly answered. I was really excited to have these guys as the “backbone”.

When you add Ronnie Black on acoustic guitar, Marshall Sipe on keys, Monte Biddy on electric guitar and Bryan Hudson on steel guitar, you’ve got a rhythm section that rivals anybody out there.

I’m blessed and privileged to have the opportunity to work with Wayne and these great folks on this project and I am extremely proud of the finished product.

Thanks to Ron Ownbey for hooking us all up. Thanks to Pam and all the rest of the members of my new family that offered their support. Thanks to Mark Stallings for his usual incredible post work and talent.

And thanks to God for His gift of giving me the opportunity to share a great experience with great people. ~Tim Eaton