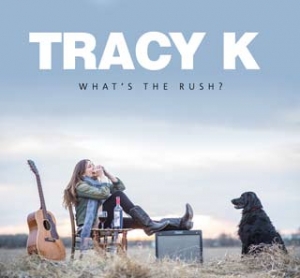 "This is outdoor-festival music, tailor-made for a big stage and (even) bigger crowd." - Rainey Wetnight, Blues Blast Magazine, 2017

“A proponent of the Winnipeg music scene, this hard driver has no aspirations to be Janis or Bonnie Raitt, she’s simply a blues-rocking babe that knows how to bring the awards home.” - The Midwest Record, 2017

"What’s The Rush? has grit and soul, and is rough around the edges in just the right places.  As a singer Tracy K is like Bonnie Raitt and Koko Taylor, and she blows some of the best blues harp this side of Little Walter.  Production at Winnipeg’s award winning Bedside Studios by Len Milne is perfect - rowdy, deep and intimate. Throwing this on is like walking into the middle of the best party ever. Stunning." 5+ rating - Gonzo Okanagan Music Reviews, 2016

Canadian "mojo mama" Tracy K has been around the proverbial block; while What’s The Rush? is just her fourth album, it still feels like the work of a case-hardened musical veteran. Ms. K gets down to the craft of getting her personal stories across with style. The engineering and mix by Len Milne at Winnipeg’s Bedside Studios is razor-sharp: it's obvious she and her compadres didn’t rush through these tracks, but instead gave them enough attention to make the grade. - Jeff Monk, Winnipeg Free Press, 2016

"There’s only eight tracks here but I’d rather have quality than a CD stuffed full of filler so this works a treat.  She has a very listenable voice and there is an insistent groove to her music that works really well. Also, she can blow a mean mouth harp." - the Rocker UK, 2016

"This lady has more than thirty years of music experience and that is evident. The songs are well-written and well-considered, each of them are little stories. And they are all wrapped in beautiful blues and boogie." - BarnowlBlues, NL, 2016

“…a powerful and rich vocalist and a harmonica player of the highest order… Navigating between folk blues, pure juicy blues and blues that is tinged with pop, Tracy K pulls no punches.” - Zicazine, 2016

"Tracy K effortlessly delivers moodfull and melodic songs and is blessed with a heavenly beautiful and lovely voice. With a certain brute force she tempers her timbre, but displays a presumptive vulnerability. She is also a very talented harp virtuoso." (translated) - Keys and Chords, 2016

"Next to her beautiful voice, she is also a gifted harmonica player. It is easy to understand that Tracy K must have a large and loyal fan base in her home country, with Europe and the rest of the world to follow very soon." (translated) - Rudolf’s Music 2016

"Her harsh and raspy vocals and 'smokey' style of harmonica playing just fascinates, and the accompanying musicians created original musical expression, deeply engraved feelings and atmosphere of the best traditional blues, and urban blues in general. This completely justifies all the saliva glistening assessment made by numerous music critics." - Soundguardian, Mladen Loncar, 2016