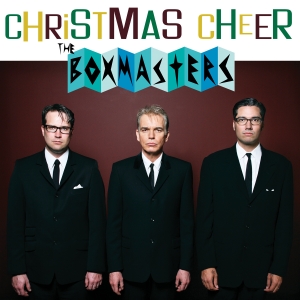 Congratulations to The Boxmasters as Modbilly reaches #1 on the US Americana radio chart for the second consecutive week!


Step away from that mistletoe, Bing Crosby! No more egg nog for you, Mel Torme! That’s because this December, it’s beginning to look a lot like a very Boxmasters Christmas.

Yes, Virginia, there really is a Boxmasters -- namely W.R. “Bud” Thornton, J.D. Andrew and Mike Butler, the remarkable band that has in its time been called “the future of hillbilly rock & roll,” “and one of a kind rootsy warriors”. Now just in time for the most fiscally frightening gift-giving season in recent memory, the ‘Masters have returned to us again with Christmas Cheer, a prettily wrapped and slightly warped box that’s stuffed full of seasonal comfort, joy and other wonderfully mixed emotions.

Following fast on the heels of their acclaimed debut double album earlier this year, the Boxmasters are now back to bring everything home for the holidays. In truth, The Boxmasters are no Scrooges, and the message of Christmas Cheer is much more moving than “Bah, Humbug!” Indeed, Thornton is fast to admit that some of his very favorite music of all time is Christmas music. “The truth is that like a lot of people, I grew up loving Christmas,” he says. “It was a big deal to all of us.

Yet as always, these Masters call things exactly as they’ve seen ‘em, and on Christmas Cheer, they’ve put together a movingly honest celebration of the holiday season as it is, and just as we might want it to be for everyone. At long last, here’s a new white Christmas classic that seems like the perfect gift not just during a recession, but for your great seasonal depression as well.

Christmas Cheer begins in high lowlife style with "My Dreams Of Christmas" (written by Thornton and Andrew) a candid Yuletide variation of the Boxmasters' earlier classic "Poor House." As Thornton explains, "It’s all about those Christmases where your parents start fighting, dad loses his job and Santa doesn’t show up. That’s something that a lot of people deal with every year. I grew up in a world where Christmas was kind of sad sometimes because we were pretty poor and my dad was a bit of a hothead. So sometimes Christmas turned into a bit of a nightmare."

Much like their suitably masterful debut, the remainder of Christmas Cheer is an inspired mix of original songs (including the standout “Slower Than Christmas” and “I Won’t Be Home For Christmas”) and past classics that the Boxmasters have made their own including distinctive covers of “Silver Bells,” “Rudolph The Red-Nosed Reindeer” and a timely cover of John Lennon’s “Happy X-Mas (War Is Over),” as well as a loving version of an earlier downbeat holiday classic “Christmas In Prison,” penned by one of the Boxmasters’ shared heroes, John Prine.

“For a Christmas album, I guess you could say that Christmas Cheer is kind of a dark ride,” Thornton says with a laugh. “We definintely cover the darker side of all those bright lights. But ultimately, the effect of the music is still very uplifting. True to the spirit of the Boxmasters, there are a couple of downers here, like our version of John Prine’s “Christmas In Prison,” but by the end of the album, somehow you don’t feel sad. You feel happy. They may just be something about the sonics of these songs -- they just make people feel happy.”

So for all of its inspired mix of darkness and light, Christmas Cheer is a musical Christmas gift offered sincerely from the Boxmasters to you. “We hope that Christmas Cheer will become a traditional Christmas record that people go back to every year,” Thornton explains. “We are relying on people’s Christmas spirit . . . or lack thereof. The album says it’s tough out there for economic, spiritual and family reasons, but Christmas is ultimately about hope and the glimmer of the kid in all of us."

Prepare for a different kind of white Christmas, Boxmasters style.
37
What's This
Advertisement