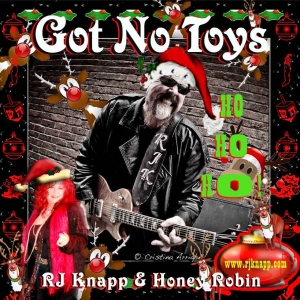 This album is a compilation of RJ Knapp's original, rocking, humorous, old school and heartstring blues. RJ will blow your mind with original vocal styling and his electrifying guitar picking - as he says in his song, I Call It The Bluz..."Bending strings for all their worth is my only joy!" And man, ain’t it the truth.

And just listen to his original, fun, Retro-Rockin', slightly psycho Santa, Christmas anthem called: Got No Toys! (for you bad girls and boys) - it's guaranteed to make you smile. He wrote it in 1987, and just recorded it November 9, 2013 - sometimes it takes a while... :-)

Chicago born RJ Knapp, is a 30 year veteran of the Seattle music scene, and has played music ranging from Classic Rock, Top 40, to Soul, Funk and Blues, from California to Canada. Second only to his phenomenal guitar playing skills, are his song writing abilities. While playing in Seattle’s Pioneer Square circuit in the 80's, RJ was given the moniker of Mr. Bluz that stands to this day.

Robin "Honey Robin" Mahaffey brings her smooth and sultry voice to the blues! With her classical training and background in Opera, Swing and R&B, she is now setting the Seattle blues scene ablaze. Her moody renditions of "Ready for Times" and "Hole in My Heart", will take you to that place where hearts are soaring, and crying comes easy.

Also classically trained bassist Robert Baker, one half of "The Engine Room" that runs this group, spreads his licks over the bottom of every song, like real butter on freshly baked bread – you just want more.

Wayde Leslie, our drummer, is the other half of "The Engine Room" that is our rhythm section. If you’re digging the freshly baked bread and butter, then spread on a healthy serving of jalapeno jelly because he’s going to kick it up a notch!