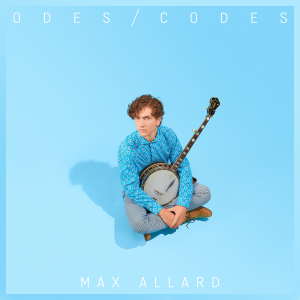 Max Allard’s solo debut album Odes / Codes is now available. Written mostly during the period of isolation in 2020, this album captures that time, with moods of melancholy, nostalgia, longing, and hopefulness.

Here’s what Béla Fleck had to say about the album:
”A new mature and poetic voice on the 5 string banjo. Beautiful compositions and a very nice touch.”

Mostly a solo banjo record with two solo guitar tracks and a solo piano piece, Odes / Codes shows how the banjo can be slow, romantic and contemplative.

Three of the odes were written for people with whom Max had a profound connection in 2020. Others are odes to a time or place. Some are codes: music in patterns and as a language.
One of the odes is a fond farewell for a neighboring family who moved away (Fiori), one was written for a new baby born to a longtime friend and mentor (Benton’s Lullaby), and one was to cheer up a far away friend in her first semester of college (For Kaya). Three are named after streets that Max found himself walking, biking or living on that year (Bittersweet Avenue, Oakland Drive and Alta).

Deco is a duet with producer Jayme Stone. Max could not pass up a chance to collaborate with such a great improviser, and the only thing better than solo banjo is dual (but not dueling) banjos.

There are also two banjo covers of solo piano pieces: one of Rideaux Lunaires by Chilly Gonzales and the other of Aphex Twin’s Avril 14th. Both Max and the original Avril 14th turned 20 last October.

Max is currently a first year composition student at Oberlin Conservatory in Ohio, but he was born and raised in Chicago, where he studied with Greg Cahill at the Old Town School of Folk Music. He has been fortunate to study with other banjo heroes: Noam Pikelny, Jens Krüger, Tony Trischka, and Béla Fleck.

His inspirations range from Ragtime, German Techno, Japanese Synthpop, Jazz, French House, Icelandic Pop, Ambient, Video Game Music to Bluegrass. He has always been interested in harmony, and he brings the influences of many genres, cultures and styles of music to his compositions.

< Go Back
8
What's This
Advertisement