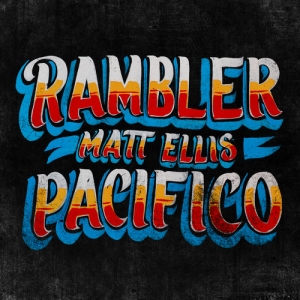 Also, check out Matt's previous release "They Don't Make em Like They Used Too" https://airplaydirect.com/music/mattellis/


“Rambler Pacifico” is a stream of folk-rock consciousness. A ramble of plain truths in a time of fake news. A collection of songs that speak to these times yet feel timeless. Recorded primarily in Ellis’ garage, these 11 songs kick and caress in equal parts. There’s enough twang to remain in the Americana club, yet there’s also a pop sensibility calling to a wider audience.


Recording began with Ellis and longtime drummer, Fernando Sanchez, at Fern’s home studio in Los Angeles, Ca. The pair began sorting through a swag of riffs Matt had been collecting since they wrapped the “The Greatest Escape” shows in 2016. After a series of afternoon sessions, the sketches of Matt’s 6th album were ready for color.


Matt’s core band members began building on the drum tracks at Ellis‘ home studio, a converted garage in Mar Vista, Ca. Australian engineer, Lewis Fordham, stepped in to record as Matt layered acoustics before Dustin Bookatz added Bass, followed by Guitarist, Josh Norton. Sessions moved fast with Ellis keeping things fluid, opting for the right feel over the right note. Tim Walker peppered in his pedal steel, while guests stopped by to improvise. Nick Luca (Calexico, Devotchka) was heavily involved, adding Farfisa, Rhodes, Moog, Guitars and more, both as a musician and additional engineer. Matt reached out to friends as they traveled through town, Craig Schumacher (Harmonica) and Joe Novelli (Lap Steel) from Tucson and Pete Okie Weiss (Accordion & Mandolin) came in from Austin. Matt knew his longtime Australian friend and Guitarist, Douglas Clarke was the perfect player for “Guns & Drugs”, who recorded his pickin’ licks both in L.A. and remotely, back home in Sydney. Friends dropped by to listen and drink and would inevitably end up singing harmony on a chorus or tracking hand-claps. The sessions were adventurous, loose and open to experimentation, qualities that define this new album.


Ellis recalls; “Going in, I didn’t have any finished songs or lyrics, but I didn’t want to lose momentum either. I wanted to get back in the studio and try a different approach to recording. I was confident I could place a bet on a guitar part and melody and I had faith lyrics would present themselves down the line. We were free to experiment and the clock never ran out. It was an indulgence I hadn’t experienced in the studio before, and I took full advantage of it.”

Ellis wrote candidly of the world around him as it happened and a lot was happening. Halfway through recording, Matt and his wife, Vavine, discovered they were expecting a baby girl, Magnolia. That untitled, mid-tempo, acoustic lead shuffle that was hanging around soon became, “Oh My Magnolia”. The duet is a message to the couples unborn daughter, welcoming her into this world, and that’s exactly what it did. Magnolia, now 8 months old, was actually born to a rough mix of the song. And that gorgeous vocal by Vavine was recorded when she was 39 weeks pregnant.


Other standout songs on the album are “Some People”, the first single, which has already received an Honorable Mention in the Americana Category of the ISC. The Sociopolitical opener, “Isolationist Blues”, a personal favorite of Matt’s, and “The Kids Of America”, a thumping, rock anthem, written in support of the teenagers behind the #NeverAgain movement.


Another song that deserves attention is track 8, “If I Had A Hammer”, a Pete Seeger/Lee Hayes cover featuring Kam Franklin of The Suffers. Fordham had worked on The Suffers debut Album in Austin back in 2014 and as a live engineer, touring with the band in 2015. Matt had the pleasure of performing with the group on several occasions too, putting Kam at the top of their wish list. Luck would have it, Kam was in L.A. putting the finishing touches on her recent solo EP at the time of recording, and she accepted the invitation to sing. The 1949 protest song has been reimagined, with a laid-back, Laurel Canyon feel, but the message is still clear and more compelling than ever.


Additional sessions took place at Steve McCormick’s studio down the street from Matt, where Nick Luca played the Piano part for “Oh My Magnolia”. Horns and one last Guitar part where recorded at Tucson’s Wavelab studio by Chris Schultz. Jacob Valenzuela, Tony Rosano, and Marco Rosano added brass to “Isolationist Blues” and “The Lucky Ones”, while Naim Amor laid down the Electric 12 string lead you hear on “Heading Home”.


The album was mixed by Nathan Sabatino (Dr.Dog, The Flaming Lips) at his Hi-Dez Recording studio in Joshua Tree, Ca. Ellis and Sabatino had known each other for several years when Matt enlisted Nathan to mix a one-off single in 2016. Delighted with the result, Ellis knew he wanted Nathan to take care of his next full length. The album was mastered by J.J. Golden and Produced by Matt. “Rambler Pacifico” is set for an independent release on March 29th through Matt Ellis’ Krow Pie label and will be available online for streaming and download at all major outlets. Visit www.mattellis.com for gig listings, music videos and more info.
5
What's This
Advertisement