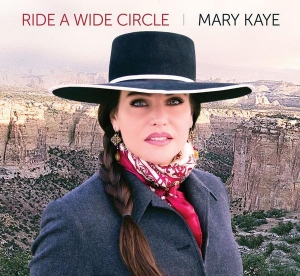 
Mary Kaye is a multiple award winning and critically acclaimed entertainer that tours extensively throughout the United States and Canada. She is a native born Texan and as a young woman ventured off to Utah where she "married her a cowboy.” Her husband’s family has deep Western roots that go back six generations. Mary Kaye now resides on a century old pioneer homestead in a small Western town in central Utah where her large family is involved in cowboying, horse training, and all things Western. She has been married to her husband Brad for 29 years, they have ten children.

Mary Kaye's 2012 album, No Wilder Place, received excellent reviews in the Western Horseman and American Cowboy magazines and debuted on the Western Music Charts at #1. Her 2010 release, Clean Outta Luck, was on the Western Music Charts for 12 months, went as high as #4 on the charts, and garnered a Song of the Year nomination from the WMA. She has just released her latest Western album, The Dawn and The Dusk, to rave revues. It is currently #1 on the western music charts!

Well known Western artist Maynard Dixon declared, "The spirit of the West sings in every soul." Mary Kaye believes this and shares this spirit in every performance.

Albums and Downloads available at mary-kaye.com