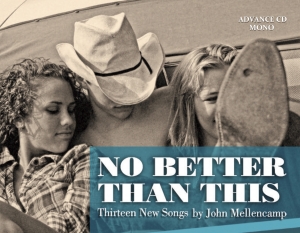 June 19th, 2010 - Rounder Records will release No Better Than This, an album from John Mellencamp of all new original songs that was recorded at a variety of historically significant locations around the South. The album, set for release August 17, was produced by T Bone Burnett who earlier collaborated with Mellencamp on the much-lauded Life Death Love and Freedom. Time Magazine called it “his best in a decade” and Rolling Stone ranked it #5 in its listing of the 50 best albums of the year.

No Better Than This was recorded over the course of a few break days afforded Mellencamp when he was on a tour of minor league ball parks last year, sharing the bill with Bob Dylan and Willie Nelson. The album was recorded on vintage equipment – a 55 year-old Ampex tape recorder with just one microphone -- in Savannah at the First African Baptist Church, in Memphis at Sun Studios and in San Antonio in room 414 of the Gunter Hotel.

Mellencamp wrote the thirteen songs included on the album during a thirteen-day span last spring. “I was tightly focused,” he related, “I got up every day and wrote and wrote and wrote.” The songs reflect various American traditions including blues, folk, western, gospel, rockabilly and country and address such themes as the need for hope, the nature of relationship and narratives that recount extraordinary occurrences in everyday life.

As far as the recording locations are concerned, they were chosen based on cultural and music history, each providing a sense of place for the respective sessions. About the experience, Mellencamp remarked, “It was absolutely the most fun I’ve ever had making a record in my life. It was about making music – organic music made by real musicians – that’s heartfelt and written from the best place it can come from.”

The First African Baptist Church is the first Black church in North America dating to pre-revolutionary times. The original congregation and ministry were slaves; the church, in fact, provided sanctuary to runaways before emancipation. Mellencamp, who has a residence in the area, has long been familiar with the church and the role it played in the Savannah community. He and his wife Elaine were baptized there before the sessions commenced.

While Sun Studios actually is a working recording facility, its equipment has been updated since the days of Elvis Presley, Carl Perkins, Johnny Cash and Jerry Lee Lewis so Mellencamp’s team used the Ampex machine and established a makeshift recording booth in a construction shed in a vacant lot next door. Mellencamp and his musicians did, dutifully, arrange themselves on the studio floor in accordance with markings that had been laid down by Sam Phillips many years before for optimal presence.

Room 414 of the Gunter Hotel in San Antonio is where Robert Johnson first recorded for Brunswick Records in November of 1936; Mellencamp’s version of Johnson’s “Stones In My Pass Way” was the first track on Trouble No More, an album of blues and folk songs released in 2003. The room has been carpeted in the intervening years so a hardwood floor was placed over the carpet to better approximate the ambience heard on Johnson’s records. Mellencamp sang facing the corner of the room that Johnson had almost 74 years earlier.

After the sessions were completed, Burnett took the mono tapes back to Los Angeles and mastered them, per Mellencamp, “in a way that made them coherent.” Sequencing of the album was accomplished by Burnett in a moment that could be likened to an epiphany. Mellencamp was present when his producer recited the running order of all 13 songs in a moment of inspired spontaneity.

Following the release of No Better Than This, Mellencamp and his band will embark on a lengthy tour of theaters throughout North America that will get underway in October and continue into the late spring of 2011. These performance dates will include a showing of It’s About You, a film that Kurt Markus made during the album sessions and while Mellencamp was on tour with Bob Dylan and Willie Nelson. The concerts will showcase Mellencamp’s music in the context of a small group as well as discreet solo acoustic and full rock band segments, reflecting the range of approaches heard on the new album.
177
What's This
Advertisement