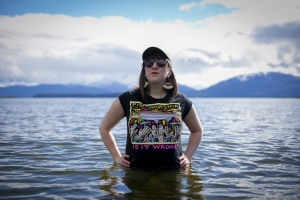 From the Land of Rusted Dreams
Album releases April 8, 2022

The urban/rural divide is a common theme in Americana, but on From the Land of Rusted Dreams, Erin Heist twists the trope and sings through the lens of a woman who grew up in the landlocked fishing communities of Southeast Alaska. Heist has spent the last decade playing the bars and backrooms of Alaska's folk music scene and her debut album gives a taste of all the twists and turns you might find at a late-night hotel jam during her hometown's famed Alaska Folk Festival.

Heist’s first recording project, stripped-down EP Another Rainy Day was released in the summer of 2021 and quickly established Heist as a new Alaskan voice to watch. On From the Land of Rusted Dreams Heist cements her place as a versatile songwriter with the ability to take traditional American music to new places.

From the deeply personal singer-songwriter first track "Downstream", to the ragtime blues of "Somebody Somewhere" to the country burner "Call Me a Fool", to the bluegrass bite of "Stranger to You", all the way to the Cajun "Sun Will Come the Dawn", Heist's album has something for everyone. Rather than feeling disparate, the variety in styles feel like facets of a single gem and the album sparkles with the heart and charm of the all-star team Heist brought together for the project.

Joined by a who's who of Northwest folk musicians, From the Land of Rusted Dreams was recorded live in Astoria, Oregon at the Rope Room Studio, recorded and produced by Kati Claborn (Blind Pilot, The Hackles). With Heist's primary musical partner, Andrew Heist (The Great Alaska Bluegrass Band) on mandolin; Luke Ydstie (Blind Pilot, The Hackles) grooving on the upright bass and percussion; and Barry Southern and Gabrielle Macrae (The Horsenecks and founders of the Quarantine Happy Hour) on guitar, banjos, and fiddle. Rounding out the sound, the album features takes from AJ Srubas (Steam Machine) on pedal steel, Beth Chrisman (The Carper Family) on fiddle, and Chris Stafford (Feufollet) on Cajun accordion. Mixed by Adam Selzer and mastered by Jon Neufeld.
4
What's This
Advertisement