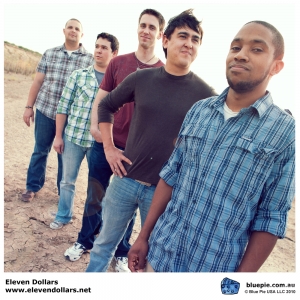 Eleven Dollars is a band that spans across several genres. They bring both up-beat and slow melodic songs with powerful and personal lyrics. The band uses instrumentation and rich harmonies in all of their music to express their sound and excite their audience.
In 2003, long-time friends Chris Mills and Cris Womack shared an apartment in Lewisville, TX. Like so many other musicians, the two starting playing and writing songs for fun. Their creativity turned into serious business as they began playing venues in the Denton area. Trying to think of a band name, Mills and Womack ended up choosing Eleven Dollars, “since that’s all we thought we would make.”

Of course, they underestimated themselves and, in 2005, they picked up the lead guitar skills of Brandon Deem and bass player, Doug Benscoter. The four-piece band played venues and festivals for another two years before bringing in the final piece to the puzzle: musician, Steve Hughes.

With the newly crafted band finally in place, Eleven Dollars has recorded a popular EP, “Missing Pieces,” and is currently working on their first LP, “Studio B,” projected for a late summer 2010 release.

Eleven Dollars has grown from a small apartment band into a potential musical powerhouse: acoustically driven feel with a rock edge allow for the addition of a wide range of vocal melodies to be laid over the top with ease.

In addition to their albums, the music of Eleven Dollars has been featured in the independent films, “After School Special” (“Laurensong”) and “In Eternity” (“You,” “Goodnight and Goodbye”). With multiple tours lined up for the summer and the talents of multiple booking agents, Eleven Dollars is geared toward becoming the next big music attraction.

In 2010, four of Eleven Dollars songs, “Laurensong”, “Near or Far”, “Cold Night” and “Goodnight and Goodbye” have peaked in the Top 20 on Indie-music.com’s Pop Rock charts.

Fast-forward to 2011, Eleven Dollars is now signed to one of the world’s leading independent record labels, Blue Pie Records. Through them they have released their latest song from their debut self titled album “Lighter Shade Of Grey” and are now back in the studio working on their new release.

Eleven Dollars is a Blue Pie artist and is out now on Blue Pie for the world. For more information go to www.elevendollars.net or search “ Eleven Dollars” on Google.