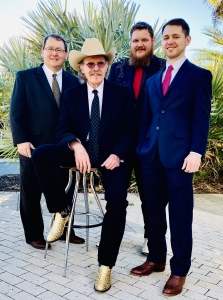 "Here In The Country" is the new single by Terry Baucom's Dukes of Drive. It is also the title track of the new release on Driving Duke Records. Written by Jamie Dailey and Devin McGlamery, this song is radio friendly and paints a vivid picture of a downhome, country lifestyle that many enjoy and others can only dream of having. All 10 cuts on the new recording were carefully selected and feature many of the band members favorite songwriters. Will Clark handles the majority of the lead vocals, while Terry Baucom and Clint Coker provide harmonies. Cindy Baucom is featured on "The Table", as well as the band's first-ever Holiday offering, "Christmas At The Old Homeplace". You'll even hear a nod to J.D. Crowe in Baucom's banjo solo. After more than 5 decades as a professional Bluegrass artist, Terry Baucom continues to have a passion for his craft and gets new inspiration from the newest members of the Dukes of Drive, Will Clark and Clint Coker. Thanks for listening and sharing on your shows!