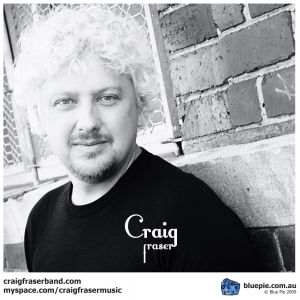 Craig Fraser started learning the piano at the age of 5 and continued with it through to his early 20’s. When Craig Fraser was growing up his first great loves in music were the Beach Boys and Slim Dusty. Their albums “20 Golden Greats” and “Slim Dusty Lights Coming over the hill” still influence his own style today and remain his all time favourites. Growing up in the 70’s in Australia was a great time for music.

Craig has always loved 70’s rock and is a fan of bands such as Iggy Pop, The Stooges, Wishbone Ash, Black Sabbath and Pink Floyd. These artists certainly coloured his direction in music and have been an inspiration in his latest works. In the early 1990’s he commenced playing in the originals band “Presence” and playing hard rock at the major band venues of the time including “The Epsy”, The Gershwin Room, Punters, Rochester Castle and the Palace to name a few.

“Presence” broke up in 1997 but the experience was to help form Craig’s song writing and performance skills giving rise to a solo career. After 9 and half years of attempting to get new bands together Craig gave up but continued to write his own songs. In a rare rock and roll moment while getting his hair cut, he ran into Michael Zammit of Airwaves studio. Michael brought Craig out of the dark ages and into the wonderful world of 20th century musical technology, where he learned what could really be achieved. Craig found Michael to be an inspiration and it wasn't long before they commenced recording together.

With Craig on vocals, keyboard and harmonica and Michael Zammit on drums, guitar and bass, they completed “Sometimes”. This 12 track, two disc CD set of relaxing tunes are all written by Craig and are originally composed on the Piano.

Craig’s songs sit somewhere in between light country, folk and pop with a smidge of rock thrown in for good measure. Craig takes his songs very seriously. As Craig says his songs are: “A bit like a diary they’re just certain things that have happened and the way you see it that are meant to be and not changed. For me they are just a way of keeping sane, you can say what you like in a song nobody really knows what or who its about."

Craig has recently teamed up with Eric Ricaud, and Michael Zammit, for the production of ‘One More Little Chance’ a house/pop powerhouse track with huge potential for radio play and club rotation.

When Craig writes he is either playing around on the piano and a melody that you like develops or a word or a sentence pops into his head and creates a theme for a song. The hardest part is joining these two things together and quite often you just can’t and there are still after years of trying plenty of melodies without lyrics or words without music. Some come together easily other may never come together.

For Craig writing music and lyrics is something that is on a non stop flow from his life experiences. His songs and lyrics pain pictures that are echoed in writers like Nick Cave, Leonard Cohen and the Eagles.