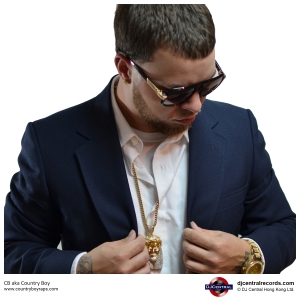 Innovative, explosive, seasoned, are all great adjectives that describes this talented young artist. Country Boy is the true definition of an artist just waiting for his moment to seize greatness. He is not only a great MC and song writer, Country Boy is also an extraordinary producer, and graphic/visual arts perfectionist. Besides being an emerging talent, Country is truly a caring, down to earth person fueled with passion and love.

Country Boy’s journey began on July 17, 1987 in Alexandria, LA. After moving to Texas at a young age in grade school he began to learn to play various instruments in the school band and became a natural musician. Later during his years in high school, Country Boy decided that music was his calling and his path that he wanted to pursue for his career. Anxious to find his place in the music industry, Country began working, releasing several indie projects on his own even a mixtape with DJ Scream and DJ MLK in 2011 called, Not Your Average Mixtape. CB also began to gain a lot of local attention in Houston through his hyped performances at various venues and open mic showcases.

Later, Country Boy landed his first record deal in 2012. Shortly after he released his first solo album “No More Games” in the Fall of 2013 which generated Country Boy a great amount of attention underground and within the music community even landing him shows opening for such acts as Rich Homie Quan, Webbie, & more. This is also when Country Boy’s media company Fire Images started taking off. His art and graphic works landed him on the front page of many popular music websites/blogs, including the front page of music mogul Birdman or Baby of Cash Money Records website Stunnalife.com. Country Boy's artworks also included work with YMCMB, We The Best artists, Wiz Khalifa and 100s of indie artists.

Recently, Country Boy released his highly anticipated independent mixtape, Back To The Basix that included great singles such as “No Love No Loyalty” which gained him national radio airplay. “My Old Ways”, which the video landed him his own Vevo Channel, and also features with industry majors such as French Montana and even the Legendary Blues Singer, Sunny Blue Bland, son to the late great blues singer, Bobby Blue Bland. Soon to follow, on a mission for greatness, Country Boy then released his project The Flood, in April of 2015. The Flood is the project that really made a mark for Country Boy in the game, gaining him many placement opportunities, greater radio spins, many blog & media platform’s attention and grew his fan base tremendously with over 250k streams within the first 2 weeks of release.

Country Boy has truly developed into an emerging artist and a great spirit that is on the path for super stardom. He has overcome much adversity and many obstacles in life from such an early age. You can hear his side on his new project, Soul Full, which was released on August 31,st 2015. Country Boy sets out to again shock the music community bringing back a deeply rooted, soulful, hip hop sound and share his story further with the fans. Keep your eyes and ears open for Country Boy as he continues to spread his works and the Country Boy brand.