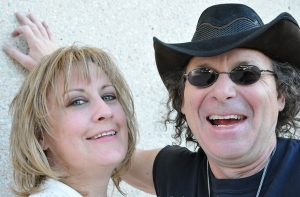 In the last 5½ years by performing more than 100 times each year, releasing 7 CDs & cataloging over 70 original compositions of their brand of Americana Music, JC & Laney have emerged as one of the most Must See Duos in recent times...You won't believe your ears!

Brought up in Long Island NY, JC Scott cut his teeth playing acoustic guitar at age 13 in front of the eclectic crowds in Washington Square during the hey day of the Greenwich Village Folk Music Scene.
With numerous songwriting & publishing positions under his belt and experiences playing & recording 5 solo CDs with musicians from Arlo Guthrie, Kenny Loggins, Weird Al and a wide assortment of others, his songs are best known to the various folk singers across this country who perform them.

Laney Greynolds started singing at age 5 & as lead singer and driving force with Saddletramp, a well known classic rock band, has recorded with many artists over the years and is the reason JC & Laney are where they are today. Her voice is a powerhouse of emotion you must hear to believe.