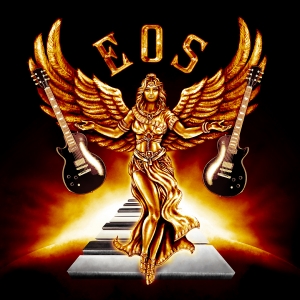 EOS Benefit takes over The Stone Pony-November 12
"EOS Benefit takes over The Stone Pony-November 12! The show will feature some of New Jersey’s best acts and organizations all pulling for our men and women serving overseas. EOS will headline the Show. The Toms River based ten- piece band rivals Tower Of Power when it comes to stage elbowroom. Featuring five lead singers (wow) EOS explores everything from their own deep, dark, extraterrestrial originals to a few obscure and random cover songs that will leave you singing aloud and deep in the party. This group has been quietly assisting these military organizations for quite a while, raising tons of cash and handing over every dime to our men and women overseas. All proceeds from ticket sales, downloads of EOS songs and raffles will be donated. EOS has teamed up with Adopt a Soldier Platoon to put on this rock and roll event. "
- John Pfieffer, The Aquarian(Nov 02, 2011)

EOS And Toms River Music Donate Guitars For The Troops!
" EOS And Toms River Music Donate Guitars For The Troops! Recreation is hard earned and many of our troops need things to occupy downtime. That’s why some of the base leaders have been asking for guitars for soldiers so they can learn to learn to play when they aren’t out on patrol. One base Colonel said, “These kids have nothing to do. There is one recreation center with around four Xboxes, some pool tables and ping-pong table. That’s not really much for so many people.” Joe Birardi of the band EOS in conjunction with John Diehl of Toms River Music in Toms River have graciously joined in an effort to procure several guitars and amps for our men and women overseas. They have purchased these instruments with their own money and are asking anyone that might want to help to donate any amount towards this great cause. It’s a small thing to do considering all that these people have selflessly done for us. To donate to this project go to www.adoptasoldierplatoon.org."
- John Pfieffer, The Aquarian(Jun 29, 2011)

EOS Rocks The Stone Pony
When I first saw this show I was not sure what to expect. I wasn’t sure what EOS was about but the show looked interesting so I contacted them and asked if I could come to the show to check them out. Bill T. responded with an absolutely come on down we would love to have you. When I arrived Bill was so appreciative of me being there that he escorted me into the venue, intoduced me to a few of the band members and handed me an official EOS laminate. I was very impressed right from the start but still wasn’t sure what they were going to sound like. To my amazment they sounded so incredibly tight, their musical talent and strong vocals were so enjoyable to watch. EOS is an eleven-piece Alternative/Power Pop/Rock band, its four sizzling female singers put this group way over the top in the best of ways. I was so fixated on the passion and facial expressions that they all had while performing. The professionalism was so evident on stage that it seemed like they never missed a beat. Band members are Danielle Zelenak - Vocals, Dawn Szollar - Vocals, Theresa Wilson - Vocals, Patti Ogletree - Backing Vocals, Joe “Ciid” Birardi - Lead Guitar, Bill Tuohy - Rhythm Guitar, Kevin Losardo - Acoustic Rhythm Guitar, Wendy Williamson - Bass, Brian Picardi - Drums, Gerry McKittrick - Percussion and Andy Ilyinsky - Keyboards. EOS has worked closely with several New Jersey charities including: Adopt-a-Soldier Platoon, The NJ Elks Army of Hope, Operation Jersey Cares, and The Lt. Dennis W. Zilinski II Foundation. Thanks to you, we have been able to raise nearly $20K for these causes to date. Please click on the Adopt-a-Soldier icon below to donate or get information on how you can help support our troops. This show turned out to be a very enjoyable show for me and want to personaly thank EOS for having me.
Jeff Crespi
jeffcrespirocks.tumblr.com