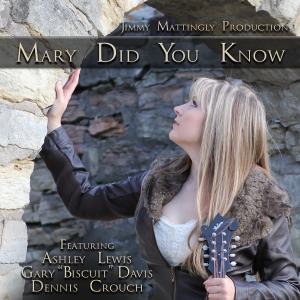 Ashley Lewis' Legacy
The worldwide debut of Captivated is making a dynamic impression on radio and fans alike. Ashley's signature slick mandolin licks, impressively driven dobro by Andy Hall, the inspired bass playing of Dennis Crouch, fiery fiddling of Jimmy Mattingly, powerful banjo of Sammy Shelor, solid guitar of Cody Kilby, Kent Wells and Josh William along with the warm texture of Josh's harmony make this album a force to reckon with. Sailing to the top of the charts with the leading single, "Rivers Rising," a total of ten songs went on to chart in the Bluegrass Today National Airplay Survey Top 20. Producer, Jimmy Mattingly says, "This album is a great example of an unbelievable talent which is portrayed on this project through Ashley's prolific songwriting, musicianship and passionate vocal style."

Carl Jackson's vocal performance on "Blockade Runner" is incredible, haunting, and brilliantly executed on this song which is based on a true Civil War legend. Vince Gill contributes his phenomenal guitar solo style on the fun swing song, "You Put The Fire In Me" penned by Ashley Lewis and Jimmy Mattingly. Jon Randall's harmony vocals blend warmth and truth into every track, while Dennis Crouch's bass backs up the album with strength and integrity. Andy Hall's dobro dances through the album with spot on sincerity, while Josh Williams' rich voice is featured on the duet, "Another Place Another Time", intertwining yet another element of dimension to this anthology of songs.

This CD soars through 12 of Ashley's original songs, including, "Ghost" co-written with IBMA Songwriter of the Year, Jon Weisberger, plus a beautiful rendition of "Hallelujah" and an unforgettable retro cut of "Minor Swing."

Receiving worldwide recognition for her music, Ashley Lewis and her band, Legacy, enthrall audiences across the country with rich instrumentation and impassioned vocals. Known for her sparkling vocals and captivating mandolin performances, Ashley is also a profound songwriter, and evidence of her Kentucky bluegrass legacy appears in the words and music of her original songs. While her roots are in bluegrass, Ashley branches out to deliver an energetic and riveting performance with an innovative approach to all facets and genres of music while providing fresh definition to the traditional tunes. By blending a variety of mandolin styles and her own rhythmic technique, Ashley has developed that unique and distinctive Ashley Lewis signature sound.

Whether at home in the USA or abroad, her band consists of some of the finest talent known. The combined effects of pure vocals, smooth harmonies and acoustic instruments consisting of mandolin, fiddle, guitar, banjo, dobro, and upright bass blend to create that inspiring newgrass sound. They give an unforgettable
performances with an honest and genuine quality that leaves audiences spellbound. Award winning artist, Dale Ann Bradley comments on Ashley’s music, “I sat there with a smile on my face the whole time. You are a natural! You have the beauty in your
heart and it comes through in your music.”

While touring and entertaining from coast to coast and beyond, some highlights have been her performance on the Emmy Award winning program, Arts Across Illinois on WTTW Centerstage, and has often been featured on the Avalon Theatre stage at the
Fallsview Resort in Niagara Falls, Ontario.

A seven-time award recipient of the Illinois Arts Council for mandolin, she has also been recognized by the Illinois Arts Council as an accomplished and accredited Illinois ArtsTour musician who is preserving the heritage and art of Americana music. She graduated from Waubonsee College with a Music Performance degree and Presidential Honors. In 2007, she was honored with the prestigious “Fab 40” Award from the college for her musical contribution to society as a musical artist.

The Here I Stand album
Ashley recorded her second project with the Entertainer Band of the Year, the Grascals, and Female Vocalist of the Year, Dale Ann Bradley, to create the notable CD, entitled, Here I Stand. Ten of the thirteen tracks on the album were written or co-written by Ashley.

Ashley proudly plays GHS strings on a Gibson mandolin with a BlueChip pick and keeps it in tune with her Intellitouch tuner.