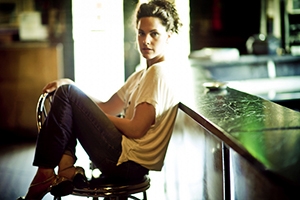 Movies that claim to be “based on a true story” are often a loose interpretation, and this concept record is a bit like that. I really did run away from home, if only for a few days, and parts of this song diary come from those honest emotions and true events. But I wanted these songs to flow like good film, like my daydreams do, so I took a storyteller’s liberty here and there. My hope is that this collection is an all-encompassing escape for the listener; a chance to runaway for 45 minutes and get lost in a good story.

In tenth grade my friend Becky and I decided on a whim to just split. Our friend Jenny drove us downtown to the Detroit bus station and we went to Chicago. We slept in the big train station where we were approached a number of times by what I’m sure were pimps wondering if we needed “work.” We definitely looked the part of teenagers ready to find trouble, and after a couple of nights we were caught and taken by paddy wagon to Juvenile Hall and then flown home. It was an adventure, and fortunately it had a safe and happy ending. Not every runaway gets so lucky.

In 2009 I was invited to play an opening run for an artist named Seasick Steve. His life story is full of hobo adventure. He ran away at 14, hopped trains, played music and had a million interesting jobs and stories to tell. After recounting some of his vagabond stories I thought how I would have loved to have him guide me through the ways of being a real drifter, had I not been caught in that Chicago train station. His stories made it seem romantic. Knowing Steve, he would have eventually steered me home and so my daydream turned into the song “Rabbit.” It opens the record, and I see it as something of a foreshadowing in the storyline.

The cover songs stitch together and round out the storyline. “Where I Lead Me” brings a little fun and defiance to the drifter in our story, when she’s feeling free and empowered and isn’t yet homesick or hungry. “How” struck me at once as a song always appropriate at some point in just about any story’s plot, and “Dark Moon” comes at the moment she’s realizing that there is always a dark side.

My filmmaker friend Mike McCarthy wrote “Lousy Pretender,” which I tried to include on my last record, Stranger Me, but couldn’t make it fit. It seems to settle better with this collection of songs – perhaps it’s a bit ambiguous in its literal place in the storyline, but this is where the listener gets to decide who plays the cheating wife.

I’m sure now that when taking that trip to Chicago I was really running to something not away from something. My home life wasn’t tragic – some parts were just sad and unsatisfying. My parents had recently divorced, my sister was angry and in trouble, and school bored me to tears. Most of my friends were lost souls experimenting with drugs (I am not excluded on this one count), skipping class (well, this one too), getting pregnant (thank goodness, not this one) and nothing seemed to be happening. As a matter of fact, I believe all of them stayed near that small Michigan town and now have nice families and regular jobs. At times that life seems desirable, but my nature is too restless. I wouldn’t last.

The song “Big Sister” is written from a child’s perspective. When we were young my sister and I fought like animals and I thought she was the meanest thing on Earth. She seemed cruel, sometimes abusive and was a vacuum for my parent’s attention. Today, my sister is amazing. We’re close, and our teenage years are water under the bridge. She’s also an artist – now that I understand her better, I know she felt things in our childhood with an artist’s sensibilities and was in a lot of pain.

“Last Rock’n’Roll Boy To Dance” falls in with the theme of a drifter’s restlessness and recognizes the restlessness in another. The Last Rock’N’Roll Boy to Dance is someone behaving in a way that embodies reckless abandon with indifference to the judgments about the common cool kid at any rock club.

“Snowflake” is the most honest song here. It’s my perspective, in my language and gives an accurate account of what went through my mind in the act of leaving. It’s kind of like my version of “Somewhere Over the Rainbow.” I moved away from home for good at 17. I briefly quit school, later finishing at night school while working at various restaurants. I saved my money and moved to L.A., but I couldn’t find a job – 17 days later I asked my mom to wire me some money to get back to Michigan. I left again at 19 and moved to Louisiana, then Nashville, Ocean City and Orlando. I eventually made it to Memphis, which I now call home – but I tour more than I’m there, and it satisfies my nature.

I wrote “Self Made Orphan” in the middle of a terrible crush. The desire to be connected to my crush was so powerful that I was sincerely terrified. I was trying to convince myself that I didn’t want to love or to be loved in any kind of needy way. I was so distracted by this man that my brain twisted every song on the radio to be about us. The matters of the heart scare me more than anything, and actually, the entire record was recorded under this duress. Anyway, I gave the song to the character in my daydream. I put her out on a sidewalk with a transistor radio and let her try to convince herself that she was happy with what was around her. Of course, through the writing of the song I knew I was going to have to get brave and take a chance — run to something — and I’m so grateful I did.

When I was a kid, my mother once said, “You could drop Amy naked in the middle of New York City with one dollar and she’d walk out clothed with a hundred.” Naturally this is one of my favorite things she ever said about me. I try to buy into it as I roll around the world. At times I am running away from a bad experience and other times racing to what I know will be a good show or a chance to see some friends. And when I am in the van traveling down the road, this is my favorite time of the day – I like to turn on a record and run away in the story, lose myself in the daydreams the music conjures. This record is for daydreaming.

Thank you for listening.
14
What's This
Advertisement