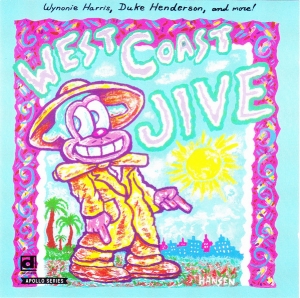 Jive, blues and jazz worked hand in hand and enjoyed considerable popularity well into the ’40s. This was Central Avenue’s heyday when club after club opened during the tremendous buildup of wartime industry in California. This recording is an entertaining and always musically viable picture of West Coast Jive during its creative peak.


"The situation: In the 1940s there was a "zone" wherein blues, big band swing, small band jazz, and the beginnings of rhythm & blues OVERLAPPED. The "jive" referenced in the title: Songs that are intentionally fun, funny, silly, irreverent, etc., songs about romantic frustration (or getting "weighed"), partying/getting loaded, etc. Many of these songs are blues with strong jazz overtones, and there's some early work herein by CHARLES MINGUS, LUCKY THOMPSON, and a few others that went on to bigger things. Except for WYNONNIE HARRIS, most of the performers here on not that well known (except to scholars of pre-1950s West Coast jazz and blues). The point, if I have one: This stuff is great fun, music to put on while you dress for your Saturday night on the town." - Amazon review