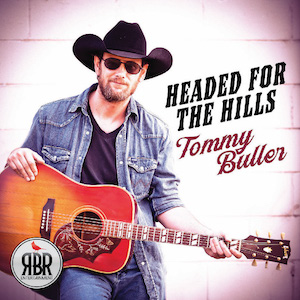 
High Lonesome
Tommy Buller has released his newest single "High Lonesome" which is now available across all music platforms for pre-saves.

Written by Gretchen Peters, the single follows up previous singles "6 Feet Under and Still Going Down" and "Nothing Said It All" both of which reached the top 10 on multiple bluegrass charts.

"Randy Travis has been one of my heroes since I was about 5 yrs old. I remember when he released the "High Lonesome" album. I thought, that's a great song. I played the song for years with my parents bluegrass band. It has always been one of my favorites." -Tommy Buller

Written by Tommy and his friend, Bart Hansen, the single follows up previous singles "Nothing Says It All" and "I Still Call It Home" the latter of which reached #8 on the bluegrass charts. "This song was originally written for a country music project that I'm a part of. I thought, if we speed this up a bit, it would be a great bluegrass song" -Tommy Buller

Nothing Says It All
Written by Tommy and Bart Hansen, the single follows up previous "I Still Call It Home". "This song was written for a country music project that I'm a part of. I thought, if we speed this up a bit, it would be a great bluegrass song" -Tommy Buller

I Still Call It Home
“The first time Billy played it for me, I listened to the words and I fell in love with the song because it's kind of the way I feel. I love being in Nashville but I always miss being at home with Mom and Dad," - Tommy Buller

Prayin' For A Cold Day
The debut single from one of Nashville's most prolific singer/songwriters. Written by Billy Droze, Billy's brother Lance Droze and Chris Myers on a cold day in January. "We had stepped outside to smoke and it was freezing. I told Billy "whoever's been praying for a cold day, needs to stop!". Once those words came out, the song basically wrote itself" - Chris Myers - Songwriter

Tommy Buller Biography
Just about 40 miles east of Nashville, Tennessee, a van pulls into a dusty driveway. The sun is coming up and horses stir as four worn tires find their resting place in the gravel. Out of the van emerges a tall, lanky man, his cowboy hat situated low on his brow to diffuse the morning sun. He’s been to Texas and back; six shows and days on end of driving. It’s been this way most of his life. He’s bonafide, true to his craft, and one of a few genuine troubadours left in our modern time.

Tommy Buller was born in Omaha, Nebraska to musicians, Joe and Linda Buller. His parents only waited until Tommy was about six years old to enlist him in their bluegrass band. His formative years were spent learning to sing lead and harmony, play guitar, and entertain crowds. By the age of 12, Tommy gigged full-time in the bars and nightclubs around Omaha. It didn’t come as much of a surprise to Joe and Linda, when Tommy announced at age 17 that he would be leaving Omaha for Texas, where he’d heard there was promise of more venues and bigger audiences.

After eight years in Texas, Buller again set his sights on greater opportunities. He took a big leap from the smaller Texas circuit to the competitive hub of talent that is Nashville, Tennessee. With so much experience under his belt, it wasn’t difficult for Buller to stand out among the dreamers and wannabe’s of Music City. His rare and exceptional voice landed him a record deal with boutique label, RBR Entertainment in 2019. Buller maintains a busy, year-round touring schedule as well as a residency at the legendary, Layla’s Honky Tonk in Nashville.

Buller has won three Album of the Year Awards with the National Country Music Association, as well as the Merlefest Songwriting Competition in 2018. He’s charted four Top 10 songs on the Bluegrass Today Singles Chart and played with Gary P. Nunn, Vince Gill, The Time Jumpers, Lorrie Morgan, and even sang with his childhood hero, Randy Travis. Unwavering in his lifelong loyalty to bluegrass and country music, Tommy Buller, has never second-guessed his life’s path. Even as accolades grow, though, it is evident that the miles traveled and hours spent may likely outnumber the dollars made. But, it’s not for fame or fortune that Buller pours his heart into his music, but for the sake of those among us who long for the simpler sounds of tradition that just feel like home.
51
What's This
Advertisement