Tim O'Brien - He Walked On 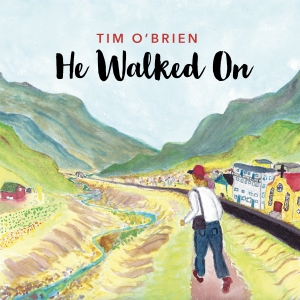 Describing his new recording He Walked On, Tim O’Brien says, “The project is about what you need to do to survive in America.” Among songs dealing with work, technology and racial strife, the debut single I Breathe In suggests that a loving partner is vital to building a viable life. “We all need a roof over our head and something to eat, of course, but we also need love. I’ve been grateful to have Jan beside me during the pandemic. The song stresses the need to take things one step or one breath at a time, and to keep those you love close as you do so.”
An O’Brien original, I Breathe In features his claw hammer banjo, guitar and mandolin, along with band-mates Mike Bub (bass), Shad Cobb (fiddle), and Jan Fabricius (harmony vocal). He Walked On (HOW-CD-2021) drops June 25,2021.
Radio promo: Brad Hunt, bhsabres@aol.com, 585-765-2083
Publicity: Carla Parisi, kidlogicmedia@gmail.com, 973-563-8204

BIO:
How do we get by in trying times? How do we make sense of the world we live in? Music has always been a balm and a tonic for those who need a little help on their journeys, whether that's needed in the form of inspiration, comfort, or relief. And as veteran multi-instrumentalist and singer Tim O'Brien demonstrates on his latest solo effort, He Walked On, it can also provide a handy map for tough roads.

Through its bakers' dozen tunes, eight new originals and five covers, He Walked On is an expansive portrayal of the nation from its beginnings to the present day through a series of musical snapshots, each training its lens from a different angle: humor, humanity, solidarity, grace. The Latin-tinged "El Comedor," co-written with O'Brien's fiancée Jan Fabricius, reflects on time the couple spent last year at the Mexican border near Tucson, visiting with a grassroots humanitarian group that offered water and food to hopeful immigrants waiting for asylum. With "We're In The Same Boat, Brother," written by "Brother, Can You Spare A Dime" lyricist Yip Harburg, O'Brien reaches back nearly 80 years for a call to solidarity that still feels timely today. And both the witty shuffle "Nervous" and the more somber "Pushing on Buttons (Staring at Screens)" set us squarely in the present anxious moment, talking technology, communication and connection blues – both tunes made even more relevant by the distanced, doomscrolling experience of the one-two punch 2020 COVID pandemic and election year. The disc image for He Walked On is an American nickel, the slogan E Pluribus Unum – "out of many, one" – prominent on top: these songs, together, make up a picture of who we are.

"The project is about what you need to do to survive in America," O'Brien explained.

Born in Wheeling, West Virginia in 1954, the Grammy-winning singer-songwriter (and West Virginia Music Hall of Famer) absorbed a broad range of American music growing up, from country and rockabilly icons like Jerry Reed and Jerry Lee Lewis backed by local ringers at the famous Grand Ole Opry-style Wheeling Radio Jamboree to Duke Ellington, Count Basie and Dave Brubeck at summer concerts in the part. His parents had season tickets to the Wheeling Symphony and brought along the young O'Brien and his sister Mollie, who would become his first bandmate; they also saw Ray Charles and the Beatles when they came through town. O'Brien took it all in, but something clicked when he first caught Doc Watson on TV as a teenager: that versatility, and the distillation of so much into the framework of traditional sounds, would be one of his biggest inspirations.

"Doc Watson's a great roadmap for anybody, really, because he played all kinds of music and made it sound like Doc Watson music," said O'Brien. "Of course, people put him in a bluegrass-folk music pigeonhole, but he really brought all of it together, and that's kind of what I was interested in."

O'Brien found a simpatico musical community in Boulder, Colorado, where he moved in 1974 and became a leading figure in the world of contemporary or progressive bluegrass – most notably in the quartet Hot Rize, which toured nationally over its 40-year tenure and earned a Grammy nomination for its 1989 album "Take it Home." In the mid-'90s, O'Brien decamped to Nashville, where he became a first-call mandolin, guitar, fiddle and banjo player on Music City sessions, and collaborated with artists like Steve Earle, Sturgill Simpson and Dan Auerbach; Kathy Mattea, Garth Brooks and the Dixie Chicks cut his compositions, and in 2015 he won a Grammy as a member of the bluegrass supergroup the Earls of Leicester, a nice companion for O'Brien's 2005 Best Traditional Folk Grammy for his album Fiddler's Green.

He Walked On comes out June 25 on O'Brien's own label, Howdy Skies, a keen interweaving of commentary on contemporary social justice issues and their echoes in our past. The stark, solemn banjo cut "Five Miles In and One Mile Down," a tune by the Kentucky songsmith Dale Keys, indicts the neglect and greed that led to the Upper Big Branch Mine disaster in 2010, in O'Brien's home state of Virginia, where 29 miners died. It resonates again in the wake of 2020, when so many workers were put squarely in harm's way of a deadly virus in service of someone else's dollar. His cover of "That's How Every Empire Falls," written by R.B. Morris and more famously recorded by John Prine, is a loving tribute to the latter, O'Brien's friend who died of COVID – and also, with its theme of responsibility to our fellow man (like Harburg's "We're In The Same Boat, Brother") another heartfelt comment on these strange and trying times.

Other songs on He Walked On were inspired by our recent explosive national reckoning with racial prejudice and violence, both the ripple effects of harm and the example of those who stood up and fought for equality. The springy album opener, "When You Pray (Move Your Feet)" takes its title from the African proverb that was a favorite of the late Civil Rights hero Congressman John Lewis. The powerfully moving "Can You See Me, Sister?" explores, through an imagined encounter between two of Thomas Jefferson's children with the enslaved woman Sally Hemings, the unquantifiable horror of slavery through intensely human, individual emotional despair and the wedge it drove between two siblings.

"You talk about the music, where would we be in America if we didn't have this mix of people from Africa and Europe and Native Americans," he said. "We're family, but we're estranged, and we've never learned to be family in so many ways. And it's crazy, and we're still suffering from that. If you read James Baldwin – America's insane. And until we figure out how to actually deal with reality here, we're just going to stay insane."

"When you sing something, it kind of sneaks in, in that music is a powerful medium," O'Brien said. "It's a language that's mysterious on its own – it tugs on the emotions. It grabs people's attention in a certain way and prepares them to hear things, and music kind of draws people together."