THE FOUNDING MEMBER OF, THE KENDALLS, Jeannie Kendall & 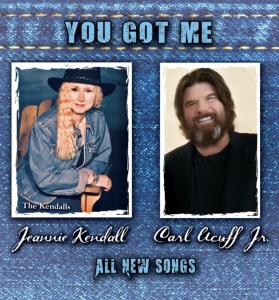 The History of The Kendalls began with Royce Kendall and Jeannie Kendall, a Father Daughter Singing Duo Sensation.
They recorded their first album at Stop Records, and released a single in 1970 with a cover song written by John Denver, "Leaving On A Jet Plane."
The Kendalls version barely missed the top 50 on U.S. Country Charts.
The Duo signed with Dot Records in 1972 and released an album and two singles, "Two Divided By Love" and "Everything I Own."
They signed with the Ovation Label in 1977. Their first single on Ovation was "Making Believe" and hit the Country Charts.
But it was The Kendalls 2nd single on Ovation called "Heaven's Just A Sin Away" that was their breakthrough. The song topped the charts and was a crossover hit, and won 1978 Grammy for Best Country Duo or Group. Interesting enough, it was the B side of the release! Following hits "Just Like Real People," "It Don't Feel Like Sinning To Me," "Sweet Desire," "You'd Make An Angel Want To Cheat," and "Put it off Until Tomorrow," The Duo signed with Mercury Records with several hits, "Teach Me To Cheat," "If You're Waiting On Me," making it to the top 10. "Moving Train" and "Precious Love," made the top 20, and "Thank God for The Radio" went to #1.
A long list of 22 Top 40's, 11 Top 10's, 3 #1 HITS!!!

Jeannie Kendall continues today with a brand new CD with all new recordings, and is joined by Carl Acuff Jr. Carl is a dynamic talented performer who adds beautiful harmonies to Jeannie's smooth powerful voice.

The history of the Kendalls continues...

1. You Got Me (3:31) Contemporary Country
2. Lovers Moon(3:17) a beautiful ballad love song
3. Grandmas Quilt (3:31) A Country Bluegrass style song written by Jeannie Kendall, Bonnie Trulove, Leaping Hawk Records & Publishing.
4. Feel Like Traveling On (2:48)
5. Pray - I Gotta! (4:02) A Country Gospel song, written by Glen Duncan, Amber White McDonough, and Phillip White 6. No Teardrops Tonight (4:03) A Western Swing song written by Hank Williams Sr. and recorded in a different style here by Jeannie.
7. I Love That Look On Your Face (3:06) Country an original release, written by Bill Whyte, Jimmy Fortune, and Sydni Perry
8. Blues Stay Away From Me (4:52) written by The Delmore Brothers, and Wayne Raney, and Henry Glover. A nice new Blues sound in Jeannie's own style
9. In Memphis (4:11) Blues original
10. Island in The Kitchen (3:54) An original Country Classic written by Jerry Gillespie and Dan Willis
11
What's This
Advertisement