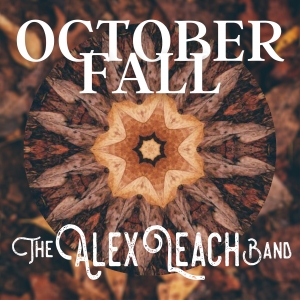 If The Alex Leach Band’s debut single for Mountain Home, “Take The Long Way Home,” was a brash, sunny slice of progressive-leaning bluegrass, the quintet’s second Jim Lauderdale-produced release reveals a different side of the group and its leader. Written by Leach and Georgia musician Evan Rose, “October Fall” is a veiled, yet intensely evocative study of memory and loss, all the more powerful for its enigmatic lines and restrained accompaniment.

“I was hanging in Georgia with a fellow musician and good friend of mine, Evan Rose, about 11 or 12 years ago when he sang a song for me that he was working on,” Leach recalls. “I could tell it had a deep meaning with him, but wasn’t sure of the whole story behind it. I carried the words and melody with me for many years before I brought it back out and added another verse to it. The writing of this song spans over a decade, and I hope it will hit home to listeners who may have dealt with losing a close friend in their adolescence."

“I was remembering the times I had with a good friend,” explains Rose. “She and I always hung out during the October festival in Guyton, Georgia. When we were both in our teens, her life was cut tragically short. This song reflects some of our special adventures together."

And as the arrangement slowly adds more instruments and textures, Leach adds detail upon detail to paint a picture at once misty and blurred, yet achingly precise in its emotional truth. For those who know Alex only for his mastery of the quintessentially bluegrass Stanley style--and, indeed, for just about everyone--“October Fall” is bound to be a revelation that, for all his devotion to bluegrass tradition, The Alex Leach Band is firmly planted in a thoroughly modern musical world.
6
What's This
Advertisement