Daniel Seymour & Mark Robinson, CHUG IT DOWN AND GO 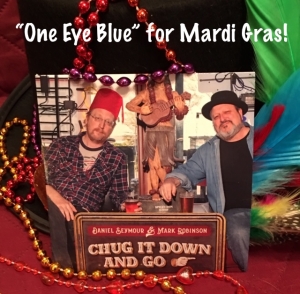 LIVING BLUES says: "'One Eye Blue' scampers off with a roving accordion into a Cajun reel ... the song illustrates the duo's humor ... The ragged beauty of 'Chug It Down and Go' shimmers ..."

DOWNBEAT says: "This album, featuring two of the leading roots musicians in Nashville, no exaggeration, gives listeners the sense that they're hearing them play at some private gig. Friendly and witty ... vibrant acoustic music that lingers in the mind."

Out November 10, the all-acoustic 10-song album stems from a deep friendship and a love affair with great American music that authentically embraces the sounds of country, blues, swing, folk, string bands, Cajun and more.

NASHVILLE, TN -- With its visions of slow trains, Dixie sunsets, irascible rounders and love on the rough and tumble, Chug It Down and Go sounds like the work of a couple of vagabonds who pocketed some pages from the classic American songbook and hit the road. But Daniel Seymour and Mark Robinson aren't refugees from a Steinbeck novel. They're two of Nashville's most respected roots musicians, whose command of country, blues, jazz, and folk music has made them favorite accompanists, co-writers and producers for a host of Music City dignitaries of song including David Olney, Tommy Womack, Davis Raines, Phil Lee, Calico the Band, Mark Huff, Sam Outlaw, Amelia White, Andy Friedman, Tiffany Huggins Grant and Mike Cullison.

Robinson is the leader of the Mark Robinson Band and winner of the Best Roots Guitarist award in The Alternate Root’s readers' poll. His group's deep blend of blues, rock and jams—caught on three albums including 2017's "Live at the 5 Spot" -- has won them fans across the U.S. and Europe. Seymour's followers also span the Atlantic, thanks to his touring on bass with Olney and others, but the all-acoustic "Chug It Down and Go" marks his move from the footlights to the spotlight.

"We've played together so often for so many years that starting our own duo happened naturally," explains Robinson. "We were in my studio, talking about songs we'd written and how we rarely get to play acoustic instruments on gigs or in the studio. And Dan said, 'What's stopping us? Let's start now!'"

So the longtime friends' laid-back sessions began immediately, with two of Seymour's songs: the inebriated shuffle "Chug It Down and Go," which features Robinson's elegant resonator guitar, Seymour's slapping upright bass, and a harmonica solo by David Olney, and the rambunctious "Mississippi Line," which captures the joyful sound of a 1920s Memphis street band.

From there, the album became an open road, with stops along the way for nearly every style they've absorbed over the decades: blues, pure county, swing, Cajun, bluegrass, folk, and jazz. Sometimes the genre is overt, as in the stone country "Slow Moving Train," which features a warm, world-worn vocal performance from Robinson that gets right to the song's heart. And on others, like "Gypsy Moon," multiple sounds and styles weave their way into a distinctive, organic whole.

"I think it's musical genetics," says Seymour, who's finally sharing songs he's been stockpiling for 20 years. "America has been the birthplace of so many great musical styles, just since people started making recordings, that over the years it all starts to mix, the way people from different cultures do. So today, it's natural to hear the sounds of country and blues blended together, or a romantic Stephen Foster-style song like my 'Dixie Waltz' alongside a Cajun tune like 'One Eye Blue.'"

It's not just a matter of the music's genes. For these two Indiana natives, who sing and play nearly two dozen instruments between them on the album, it's also in their own DNA. "We’re both historians," says Robinson. "We love listening to all kinds of music from the past and mentally cataloging not only the great songs and artists, but also the sounds of that music. And with 'Chug It Down and Go,' we’ve done our best to capture those sounds that inspired us and bring them into the present."

Seymour comes from Hartford City, Indiana, and Robinson from Bloomington -- towns about 115 miles apart. Both studied music and spent years in the trenches before moving to Nashville. Mentored by the great bluegrass musician, bassist Raymond McClain Jr., Seymour was steeped in the genre, playing with a variety of artists at events like the Dock Boggs Festival, at venues like the famed Carter Fold, and on the Smithsonian's To the Mountains Tour. Robinson dived headlong into blues, fronting bands and, after moving to Chicago, playing with Jimmy Johnson, Sunnyland Slim, and Koko Taylor, among others.

Their paths met in Nashville nearly a decade ago, when they were hired to play behind singer-songwriter Mike Cullison at East Nashville's Tomato Arts Festival. They were mutually impressed with each other’s estimable musical abilities and amiable natures.

They continued to meet on stage behind Frank Ortega, Tommy Womack, David Olney, and others. And when Robinson formed his own band in 2010 to record and tour his songs, Seymour became a charter member, playing bass and singing backing vocals.

"Chug It Down and Go" is the next logical step -- a friendship and a love affair with great American music crafted into an album that sounds as enduring as its sources of inspiration. It was also an excuse to stretch out and have fun. Besides writing all the material, Seymour and Robinson got their wish to play more acoustic instruments. In addition to his usual upright bass, Seymour recorded tracks with mandolin, ukulele, autoharp, percussion, and Marxophone (a fretless zither played with hammers). And Robinson plunged in with acoustic guitar, Dobro, banjo, lap steel, resonator guitars, harmonica, tenor guitar, drums, percussion, and kazoo. Guests include David Olney on harmonica, Pat McInerney on drums and percussion, Michael Webb on accordion, and Melanie and Bill Davis on backing vocals. The album was produced and engineered by Seymour and Robinson at Robinson's own just-north-of-Nashville studio, Guido's South.

"Now the floodgates are open," says Seymour. "We're writing songs and compiling ideas for the next album, and starting to play shows. And after all these years playing behind other artists, it feels perfectly comfortable and natural for us to be doing this for ourselves. It almost feels like swimming, and right now, there's nothing but a big, beautiful open sea in front of us, so we’re not stopping."

"Robinson and Seymour deliver a high-spirited, energetic, and entertaining collection of original songs with deep roots. ... It’s all quite clever and exceptionally well-performed, 'Chug It Down and Go' a truly magical collaboration between two skilled and passionate music-makers."
--Rev. Keith A. Gordon, THAT DEVIL MUSIC

"Two of the biggest talents in town have done a gutbucket record that has elements from Jimmy Reed to Leon Redbone. Get the record and chug it down and go!"
--Tommy Womack